Melancholy and Provocation at Leopold Museum 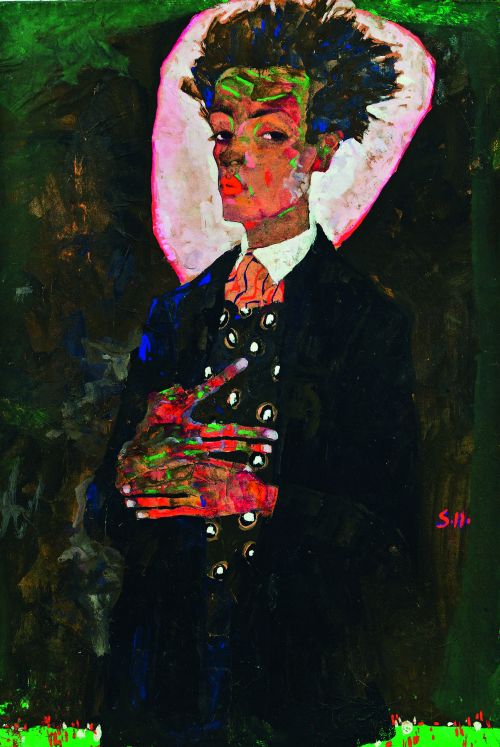 On the occasion of the tenth anniversary of its opening, the Leopold Museum dedicates its autumn exhibition 2011 to the works of Egon Schiele. The title of the exhibition »Melancholy and Provocation« is a reference to the artist’s state of mind, especially during his early oeuvre between 1910 and 1915.

Schiele’s early works of 1910 hit his audiences like »an ice-axe breaking the frozen sea within us« (Franz Kafka), upsetting the idyllic world of the conservative bourgeoisie. His renderings depict thin, emaciated men, their bodies in unnaturally bright colors and absurd contortions, with poses and movements serving both the composition and as a provocative expression of inner emotions.

While these depictions are shocking in their originality, they do bear a resemblance to the slender youths created by the sculptor George Minne and »The Dreaming Boys« of Oskar Kokoschka who himself was inspired by Minoan art. Egon Schiele also incorporated his impressions derived from Javanese shadow puppets into his works, and later the gestures of contemporary Expressionist dance.

Schiele broke away from this stylistic phase already at the end of 1910; one could say that he turned inwards. His depictions became increasingly soft, Schiele began to draw with his brush and ventured deeper into a new and unreal dreamworld, both in terms of his manner of painting and in terms of his motifs. The resulting works are wondrous and idiosyncratic visions.
In the work »Landscape with Ravens« Schiele left behind the traditional pattern of fore-, middle- and background. He interpreted the pictorial space as an integral representation of emotions, rediscovering it as an intellectual in-between world. Oneiric images and visions served as the basis for the figures in »Lyricist« and »Self-Seer«. Schiele also invented fairytale-like and psychological scenes, including »Dead City« and the work »House and Wall in Hilly Landscape« (modeled on the deserted summer house which he used as a studio before he was expelled from the city by the people of Český Krumlov).
The rendering »Dead City« provides the key to understanding all of Schiele’s works.

Schiele exhibited these works created in 1911 in his first solo exhibition held that year at the Galerie Miethke. They included the painting »Melancholia«, which he would later paint over, the five-fold self-portrait »Ravings«, which is now lost, as well as the demonic portrait of Eduard Kosmack. These works, as well as later ones such as »Dead Mother«, »Procession« and »Revelation«, show Schiele as a dreamer, as an imaginative genius – an impression that is also reflected in his poems.

The stooped posture of the figures in his main work »The Hermits« is meant to express the sorrow of the world. The artist wrote about the painting that “it was created out of an inner necessity”. All these paintings are moving artworks whose melody strikes a chord with the soul of the beholder, echoing their own feelings, experiences and dreams.

In 1914 Schiele created anthropomorphic renderings of houses such as »Houses by the Sea« which conveys a devastating atmosphere, as if the world had come to an end.

In his largest work »Levitation« of 1915, Schiele depicted hovering figures as a metaphor of dying, for death accompanied the artist all his life.

Schiele‘s works are presented in juxtaposition with the metaphorical, archaic world of Oskar Kokoschka, with the poster for his play »Murderer, the Hope of Women« and with allegorical renderings such as the gruesome-looking »skinned mutton« and the skulllike portrait »Father Hirsch«. Oskar Kokoschka’s »Self-portrait at the Easel with Doll« concludes the presentation.