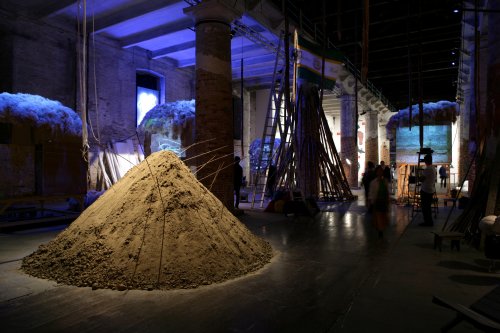 Pascale Marthine Tayou (*1967, Cameroon) works with sculptures and large-scale installations both within institutional and public spaces. His works incorporate all kinds of recycled and found material such as wood, plastic, metal, shredded paper and glass. In his installations Tayou also uses paintings and films to make complex juxtapositions of images and artifacts of urban refuse.

The exhibition Always All Ways. Omnes Viae Malmö Ducunt at Malmö Konsthall brings different subject matters into focus and the audience will encounter issues and aspects of cultural mixing with a particularly attentive and sensitive gaze to the common environmental foundation which different cultures of the entire world are depending on.
Pascale Marthine Tayou has created new works specially for Malmö Konsthall. The core of the exhibition consists of ten small house-like structures, a jumble of garden houses. This installation, called Garden houses, appears and recalls a shantytown built out of photographic images and recycled materials, mixing both found material from Tayou’s native country Cameroon and commercial packaging and waste products associated with western cultures. The visual noise and the material used create a disorientating, chaotic experience for the visitor.

In the exhibition Tayou uses natural sounds, such as water and bird sounds, to comment on how human movements and urban structures influence our surroundings. In works such as Octopus and Urban animals Tayou twists and turns prefabricated material, usually found at petrol stations and building sites, into animal looking creatures. The works Garden houses, Birds melody, Octopus and Umbrella City bear witness to Tayou’s interest for production and natural resources, and add social commentary and critique of possible overproduction to the installations.

In the work La Paix des Braves (French for “The Peace of the Braves”, which refers to a peace treaty between New France and 40 aboriginal nations of the North East of North America in 1701) a white peace flag is placed in the middle of – and flies high over – an impenetrable circle of Mikado sticks. Tayou is creating a monumental sculpture based on the world known Mikado game, and La Paix des Braves refers to both the colonial past and to the difficulties in reaching peace.

Always All Ways. Omnes Viae Malmö Ducunt clearly reflects Tayou’s own nomadic existence, moving from country to country, gathering and presenting impressions from his home country Cameroon and all the countries he has passed on his way. Tayou points at different levels in our cultures and cultural identities, and bridges the gaps between differences in identity and culture.

Pascale Marthine Tayou lives and works in Ghent, Belgium. The exhibition at Malmö Konsthall is his first large-scale installation in Northern Europe.

The exhibition has been realized together with Sølyst Artist in Residence Center (SAIR), Jyderup, Denmark.

Anna Molska at Malmö Konsthall Songbirds and Elephants for Sale: Two Works from the Collection