60 Years of Beetle Bailey: A Tribute to Mort Walker 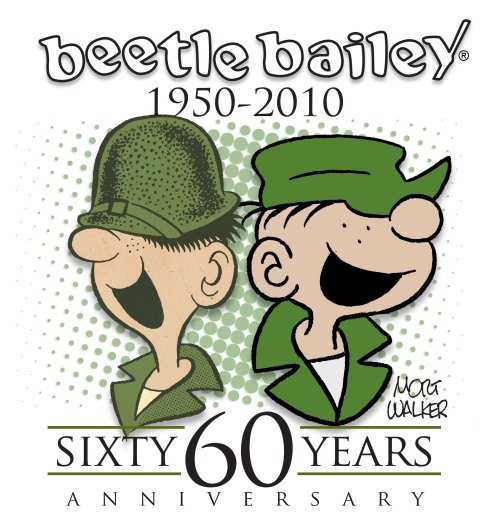 Beetle Bailey made his first appearance on Sept. 4, 1950 and today Mort Walker’s comic strip is enjoyed by more than 200 million readers daily in over 1,800 newspapers around the world. The Cartoon Art Museum is celebrating this milestone with the exhibition 60 Years of Beetle Bailey: A Tribute to Mort Walker. Brian Walker, who served as the curator of The Legacy of Mort Walker: 50 Years of Beetle Bailey at The International Museum of Cartoon Art in 2000, has selected the highlights from that historic retrospective for this exhibition.

About Mort Walker
Addison Morton Walker was born in El Dorado, Kansas on Sept. 3, 1923 and had cartooning aspirations at a very young age. His first full-time art job was as a greeting card designer for Hallmark while he attended Kansas City Junior College. In 1942, he was drafted into the army and served in Italy during the war. When he returned home, he attended journalism school at the University of Missouri and was editor of the campus humor magazine, the Showme.

Mort was working as a magazine cartoonist in New York when John Bailey, the cartoon editor of the Saturday Evening Post, encouraged Mort to do some cartoons based on his college experiences. One character, a goof-off with a hat over his eyes named “Spider,” emerged from these efforts. After selling a few college cartoons to the Post, Mort then decided to submit a comic strip to King Features Syndicate starring Spider and his fraternity brothers. When King bought the strip, Mort changed Spider’s first name to “Beetle” and added “Bailey” in honor of John Bailey.

Beetle Bailey debuted inauspiciously in twelve newspapers on Sept. 4. 1950. After six months, it had signed on only twenty-five clients. King Features considered dropping Beetle Bailey after the first year’s contract was over. The Korean War was heating up at the time, so Mort decided to have Beetle enlist in the army. He quickly picked up a hundred papers. Mort redesigned the cast and a Sunday page was added in 1952. After the Korean War was over, the army brass wanted to tighten up discipline and felt that Beetle Bailey encouraged disrespect for officers. The strip was banned in the Tokyo Stars and Stripes and the sympathetic publicity rocketed Beetle’s circulation another hundred papers. When Mort won the National Cartoonist Society’s award as the best cartoonist of the year in 1954, Beetle Bailey had become a certified success, with licensed products and a growing list of clients.

From the 1954 to 1968, the circulation of Beetle Bailey grew from 200 newspapers to 1,100 and many new characters were added to the cast. “As I zoomed past the 500 paper mark,” Mort remembered, “I began to feel a tremendous responsibility to my readers, almost a stage fright. If I’ve done this good today I’ve got to do at least as good tomorrow, or better, if I can. If you’re not moving forward in this business, you are moving backwards.” Beetle Bailey was the second feature in comics history, after Blondie, to appear in over 1,000 newspapers when it passed that milestone in 1965.

Over the years, Beetle Bailey has been attacked by the forces of political correctness and challenged by newcomers to the comics field. Mort Walker’s creation has survived and remains one of the most popular features in newspapers today. “Someone said a diamond is just a piece of coal that stuck with the job,” Mort muses. “To me the strip is a diamond. I never knew where that first step would take me and there were many rocky times, but a certain amount of fame and fortune were my reward for keeping at it.” It is ironic that Beetle Bailey, the laziest character in the history of comics, was created by Mort Walker, one of the hardest working and most prolific cartoonists of all time.