Treasures of the Jewish Ghetto of #Venice @ArtGalleryWA

In 1943 a number of precious silver and bronze objects dating from the 1600s to early 1900s were hidden from the approaching Nazi armies by a couple of elderly Venetian Jewish religious leaders who never returned from the concentration camps. These valuables, which represent traditional Venetian silversmithing and bronze-casting methods, were forgotten until they were unearthed during the restoration of the Scola Spagnola in the Venetian ghetto a few years ago, and a selection from this collection will shortly go on display at the Art Gallery of Western Australia.

Over the centuries, Venice was considered a hub of Jewish culture, with its residents playing a valuable role in the city’s economy from the time of the Renaissance. In 1516, the Venetian Senate segregated Jews in a six-acre area that housed several thousand people and five synagogues, at the site of a former foundry (geto). To mark the 500th anniversary of the Jewish Ghetto of Venice the international organisation Venetian Heritage, in cooperation with Maison Vhernier, has organised for these objects to be restored and displayed in an exhibition titled Treasures of the Jewish Ghetto of Venice. Recently presented at the Winter Palace in Vienna, the exhibition has also been seen in New York, Houston and Venice.

AGWA is delighted to be able to bring these treasures to Western Australia from 8 December, when 32 objects will be exhibited, prior to their planned display at the Jewish Museum of Art and History in Paris next year.

AGWA Director Stefano Carboni expressed his pleasure at being able to bring these objects from his native city of Venice to Perth, saying, “Thanks to an initiative by Venetian Heritage and Maison Vhernier, it was possible to restore and present these previously “lost” objects to the public. Of great significance for the Venetian art of goldsmithing, they will add much and form the core of the collection of the Museo Ebraico di Venezia, which will be reopened in 2016 at the time of the 500th anniversary celebrations of the Venetian ghetto.” These particular objects, which were in poor condition when they were found have now been restored to their former splendour.

The decorative art created by Venetian artisans between the 17th and early 20th centuries belong to a heritage that vividly demonstrates how Venetian culture, with its wide ethnic spectrum and multicultural feel, provided a role model for the rest of Europe.

Most of the silver and bronze objects on display were used during worship in the synagogues and on special occasions and holidays. Such liturgical pieces include the wooden Tikim (Torah cases), and Torah crowns and pairs of Rimmonim that adorn the scrolls or the Tikim. Also included are pieces that relate to ritual dining traditions such as silver plates used during Passover Seders and a silver ewer and basin, used for the washing of hands prior to eating. 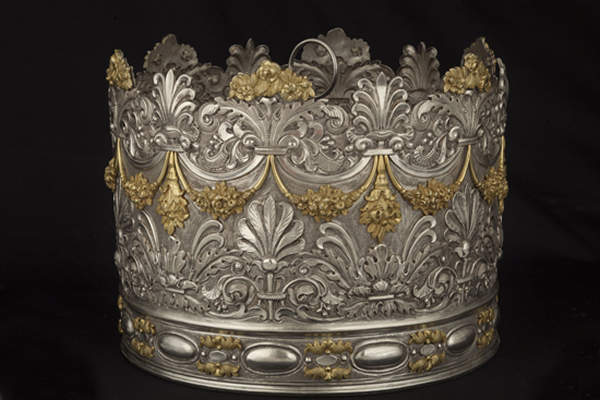