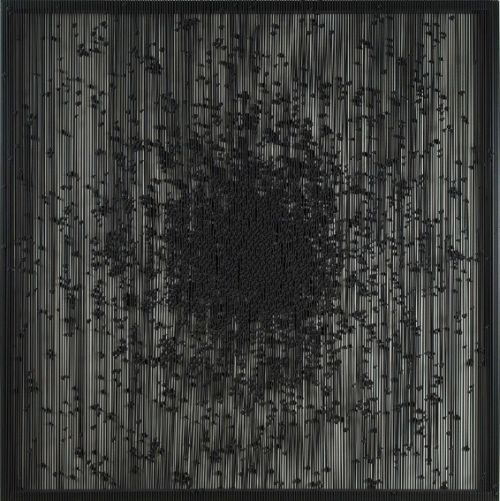 The Peggy Guggenheim Collection presents once again Themes&Variations.
First conceived in 2002 by Luca Massimo Barbero, this is the third edition of an innovative but now habitual exhibition formula that offers visitors fresh perceptions of the museum’s collections, whether known or less known, by means of a dialogue with works by more contemporary artists from other collections.

Hung in the same galleries, works from the early 20th c. avant-garde connect thematically in a confrontation and comparison with post war and contemporary works, tracing the evolution of forms of visual expression as they change with time.

‘Script’ ranges from newspaper collage in Cubist and Futurist works by Pablo Picasso and Carlo Carrà to the enigmatic marks typical of the work of Dadamaino and Riccardo de Marchi, passing through uniformly patterned works by Rudolf Stingel that contrast with Jackson Pollock’s allover calligraphy.
‘Space’, beginning with an image of the heavens by Rufino Tamayo, includes works by Mario Nigro, François Morellet and Arthur Duff.