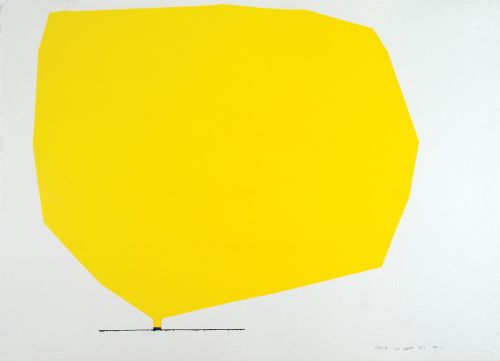 The male-dominated Minimal art movement of the 1960s was characterized by an interest in basic geometric shapes and the use of industrially-produced materials. Although many critics consider Anne Truitt (1921–2004) to be a pioneer of Minimal art, she set herself apart from the movement by focusing instead on color and content. Anne Truitt: Luminosities, on view October 15, 2011 – January 8, 2012, celebrates the groundbreaking work of this prolific artist with a 12-piece exhibition, including the Museum’s recently acquired sculpture Thirtieth (1962) and 11 works on paper from the 1970s and 1980s.

Drawn from the Museum’s permanent collection and a private collection in Wilmington, Delaware, the works featured in Anne Truitt: Luminosities explore the subtleties of light and color through abstract two- and three-dimensional forms and the artist’s desire to make light “visible for its own sake.” Thirtieth, one of Truitt’s tall, rectangular wooden sculptures is an example of the artist’s earlier three-dimensional work, while the 11 acrylic washes of color on paper highlight her later experiments with two-dimensional art.

The recent donation of Thirtieth by Delaware resident Lynn Herrick Sharp, which was featured in Truitt’s first solo gallery exhibition in 1963, prompted this focused exhibition and provided an opportunity to re-examine the ten works on paper already included in the Museum’s contemporary collection. Sharp explained, “I donated Thirtieth because I thought it was an excellent opportunity to add an important contemporary work to the Museum’s growing collection of contemporary art.”