George Nakashima and Knoll: The Making of an Object

George Nakashima’s straight back chair is subject of exhibit at the Design Center at Philadelphia University,
april 30 – june 5 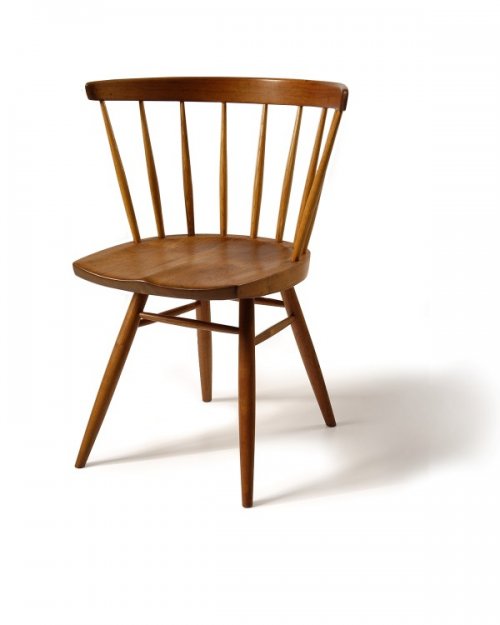 [ad#lb]
From April 30 to June 5, 2009, The Design Center at Philadelphia University hosts George Nakashima and Knoll: The Making of an Object. This exhibition tells the story of the Nakashima Straight Back Chair: first as a handmade piece crafted exclusively at Nakashima’s workshop in New Hope, Pennsylvania; next as part of the Knoll product line in the 1940s and 50s; and finally, as a modern production piece reintroduced to the Knoll catalogue in 2008. The lifecycle of this iconic chair is examined through photographs, videos and actual samples of the chair itself. Also on view are early chairs designed by Nakashima and still in production today, as well as a selection of the designer’s personal tools.

“By viewing the lifespan of the Straight Back Chair, the visitor can realize how an artist creates a well designed product that can then be translated into a more accessible piece of furniture for the public,” says Hilary Jay, Executive Director of The Design Center at Philadelphia University.

From 1946 to 1954 Knoll, an international manufacturer of modern furniture for the workplace and the home, produced a series of designs by woodworker and craftsman George Nakashima. For Nakashima, who made each of his designs by hand at his New Hope workshop, this was an opportunity to see how craftsmanship and industry could be joined to create pieces of high quality for large-scale production.

Nakashima (1905-1990) was born in Spokane, Washington, and grew up in the forests of the Olympic Peninsula. He attended the University of Washington, where he initially studied forestry before switching to architecture. After earning his master’s degree in architecture at MIT in 1930, Nakashima went to work for modern architect Antonin Raymond in Tokyo. Under Raymond, Nakashima spent three years supervising the construction of the first reinforced concrete building in Pondicherry, India. When war broke out, Nakashima returned via Tokyo to the United States. Shortly after his marriage to Marion and the birth of his daughter, Mira, the family was interned at the camps in Minidoka, Idaho. It was there that Nakashima met Gentaro Hikogawa, a man trained in traditional Japanese carpentry. Under his tutelage, Nakashima learned to master traditional Japanese hand tools and joinery techniques.

“Work for him was a spiritual calling, a linking of his strength to a transcendental force, a surrender to the divine, a form of prayer,” says Mira of her father’s approach to woodworking.

In 1946, Nakashima agreed to have a few of his designs – including the Straight Back Chair – marketed by Knoll, a manufacturer of innovative modern furniture that was founded in New York three years earlier. In order to accommodate growing demand, Nakashima worked with the Knoll product development team to manufacture his furniture at an off-site Knoll facility.

The relationship between Nakashima and Knoll ended in 1954. Then in 2008, Knoll, in collaboration with Mira Nakashima-Yarnall, reintroduced the Nakashima Straight Back Chair and Splay-Leg Table to its product line. In order to get the chair and table ready once again for large-scale production, Knoll’s product engineers had the pieces digitally scanned and translated into 3D modeling and architectural programs. Mira worked closely with the Knoll design team to ensure the integrity and quality of the final product compared to the designer’s original. Today, the Knoll versions of the Straight Back Chair and Splay-Leg Table are manufactured in upstate New York. The artist’s original version of the Straight Back Chair is still handcrafted at George Nakashima Woodworker’s studio using air-dried walnut, hand-shaved hickory spindles and a hand-rubbed oil finish.

George Nakashima Woodworker, located at 1847 Aquetong Road on a quiet hillside compound near the artist colony of New Hope, Pennsylvania, continues to produce most of Nakashima’s original designs, as well as new designs by Mira Nakashima-Yarnall. Additional information is available online at www.nakashimawoodworker.com.

Pen and Parchment: Drawing in the Middle Ages Kerri Rosenstein