Pen and Parchment: Drawing in the Middle Ages 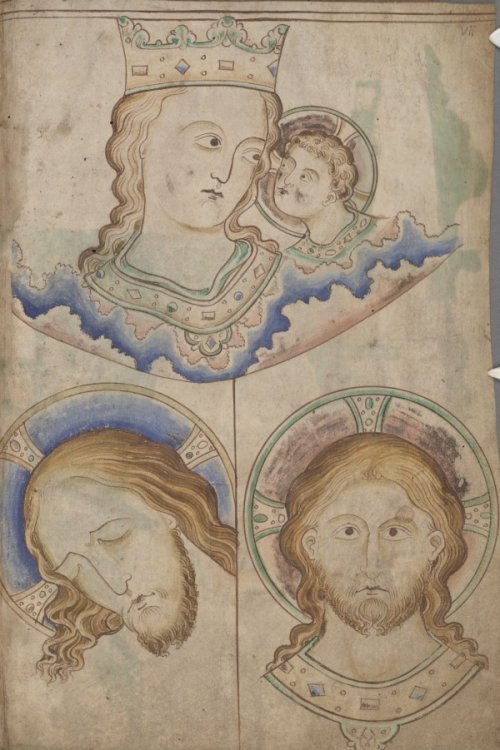 [ad#lb]
With strokes of genius, artists in the Middle Ages explored the medium of drawing, creating a rich panoply of works ranging from spontaneous sketches to powerful evocations of spirituality and intriguing images of science and the natural world. Opening June 2 at The Metropolitan Museum of Art, Pen and Parchment:
Drawing in the Middle Ages will be the first museum exhibition to examine in depth the achievements of the medieval draftsman. Through some 50 examples created in settings as diverse as a ninth-century monastery and the 14th-century French court, the presentation will consider the aesthetics, uses, and techniques of medieval drawings, mastered by artists working centuries before the dawn of the Renaissance. Works from the collection of the Metropolitan Museum will be displayed along with important loans from American and European museums, and the great national, university, and monastic libraries of Europe. Many of these manuscripts are so highly prized that they have never before been lent outside of their home country.

The exhibition is made possible by the Michel David-Weill Fund.

The exhibition is supported by an indemnity from the Federal Council on the Arts and the Humanities.

Exhibition Overview
Arranged both thematically and chronologically, the exhibition will open with a selection of early drawings from the ninth and early 10th centuries. These works will demonstrate the keen intellect and creativity of the artists, whose mastery of the pen can be seen in the diversity of the illustrations’ style and subject matter.
The earliest manuscript in the exhibition—the Corbie Psalter (around 800; Bibliothèque d’Amiens Métropole, Amiens)—features wonderfully inventive initials decorated with drawings of men and animals and was executed by an anonymous master, who was perhaps the first great medieval draftsman. Artists at the Abbey of Saint Gall in Switzerland, an early center of medieval learning that to this day retains much of its library, illustrated a wide array of texts with vibrant sketches, including the Epistles of Saint Paul (late ninth century; Stiftsbibliothek, Saint Gall) and a compilation of texts devoted to warfare (ca. 850–925; University Library, Leiden).

In the 10th and 11th centuries, artists in England embraced the medium of drawing as never before. The 150 psalms attributed to the biblical King David were favored texts that inspired artistic interpretations rich in poetic imagery. The best-known of these, the Harley Psalter (around 1010-30; The British Library, London)—a work that pulses with nervous, taut energy—is a masterpiece of Anglo-Saxon line drawing. Another artist’s literal interpretations of psalm texts in the Bury St. Edmunds Psalter (ca. 1025–50; Biblioteca Apostolica Vaticana) resulted in inventive drawings of great charm.

Manuscripts from 11th- and 12th-century France are characterized by the creative use of drawings in combination with painting. A stunning example is the monumental Bible of Stephen Harding (1109–11; Bibliothèque municipale, Dijon), intended to be the most authoritative edition of the holy text in its day. Created in consultation with rabbis and Christian scholars at the Cistercian abbey of Cîteaux in Burgundy, where Harding was abbot, the manuscript features tinted drawings, the delicate lines of which cleverly play off painted elements on the page to dramatic effect.

An impressive selection of secular works offers a surprising counterpoint to medieval religious texts. Medieval libraries preserved the heritage of the classical world, as witnessed in an exceptional manuscript of the Aratea, an ancient astronomical Greek poem translated into Latin by the Roman orator Cicero (about 1000; British Library, London). This manuscript, featuring drawn figurations of the constellations, is one of the finest of its kind. It was drawn by one of the great artists of the Anglo-Saxon period, whose name remains unknown, but whose distinctive hand yielded a small group of masterpieces. Spanish royal legal documents sometimes included drawings. A charter issued by Alfonso VII, King of Castile and Leon (around 1150; The Hispanic Society of America) is illustrated with a lively drawing of the parties involved in the legal proceedings the text records.

Long before the Renaissance, medieval artists turned to drawing to illustrate scientific texts. An anthology of the natural sciences from the English monastery of Thorney (around 1110; St. John’s College, Oxford) includes dozens of instructive diagrams, maps, and charts. One of the earliest English world maps, the Sawley Imago mundi (around 1180–90; Corpus Christi College, Cambridge) appears as the frontispiece for a compendium designed for readers without access to large libraries. It brings together in a single image a wealth of accumulated geographical knowledge from the Bible, Greek legends, and ancient cosmographic texts. Of particular interest is a consanguinity diagram from an early encyclopedia produced near Regensburg, Germany (ca. 1150; Bayerische Staatsbibiothek, Munich). The illustration elucidates family relationships to the sixth degree, identifying individuals whom one may not marry, as well as those from whom one is entitled to inherit goods or property.

Sketchbooks, model books, and unfinished manuscripts betray the working methods of medieval artists. An ornate A, B, C, or D from a Tuscan book of decorated initials (ca. 1175; The Fitzwilliam Museum, Cambridge) served as a model for artists embellishing the texts of other manuscripts. The underlying drawings of the Prato Haggadah (ca. 1300; The Jewish Theological Seminary) were intended to guide later painted decoration that would use a variety of pigments and gold. A rare early drawing of the façade of Strasbourg Cathedral (ca. 1260; Musée de l’Oeuvre Notre Dame, Strasbourg) bears witness to the increasing importance of architects and architectural plans in the age of the great cathedrals of Europe.

Several medieval draftsmen known for the individuality of their work will also be featured. Matthew Paris, the designated historian and a prolific artist at Saint Albans Abbey, was an astute observer of the world around him. He will be represented by one volume of the Chronica Majora, or Great Chronicle (around 1240–53; Corpus Christi Library, Cambridge), his most ambitious work, which contains year-by-year entries of significant historical events accompanied by an extensive and unprecedented set of marginal pictures. Bound up with this book is a magnificent tinted drawing that Matthew probably kept originally in a portfolio
of his own drawings.

The eccentric drawings of the Italian Opicinus de Canistris, a cleric at the papal court in Avignon, depict the artist’s mystical revelations and convey an obsessive fascination with the ways his biography fits into the order of the universe (1335–56; Biblioteca Apostolica Vaticana). Drawings of the passages of the stars and abstract cartographic designs replete with recognizable faces and figures form part of the almost hallucinatory visions of his fertile imagination.

The exhibition will conclude with two celebrated Gothic manuscripts that attest to the creative power of drawing as a medium in later periods. Painted figures float over a gossamer web of delicate penwork in an ornate initial in the Windmill Psalter produced in East Anglia (late 13th century; The Morgan Library & Museum). The quiet sophistication of the prayer book created for Jeanne d’Evreux, queen of France (about 1324–38; The Metropolitan Museum of Art), makes it a masterpiece of grisaille. The artist Jean Pucelle combines keen observation of daily life in the streets of Paris, humorous and fanciful caricatures, and tender religious imagery.

Exhibition Catalogue and Credits
The exhibition will be accompanied by a fully illustrated catalogue. Published by The Metropolitan Museum of Art and distributed by Yale University Press, the book will be available in the Museum’s book shops ($50, paperback).

The catalogue is made possible in part by The Andrew W. Mellon Foundation.

The exhibition is organized by Melanie Holcomb, Associate Curator, with the assistance of Elizabeth Williams, Research Assistant, both in the Department of Medieval Art.

Related Programs
The Museum will offer an array of educational programs in conjunction with this exhibition, including two Sunday at the Met lecture programs – on June 7 featuring Jonathan Alexander of the Institute of Fine Arts, New York University, and on July 19 featuring Edward Tufte, professor emeritus of political science, statistics, and computer science, Yale University, and the leading authority on information design. Also included will be gallery talks, films, a half-day teacher workshop, and family programs.

Esteemed Photographer Helen Levitt Honored with Endowment Fund and Promised Gift of Photographs to Metropolitan Museum George Nakashima and Knoll: The Making of an Object