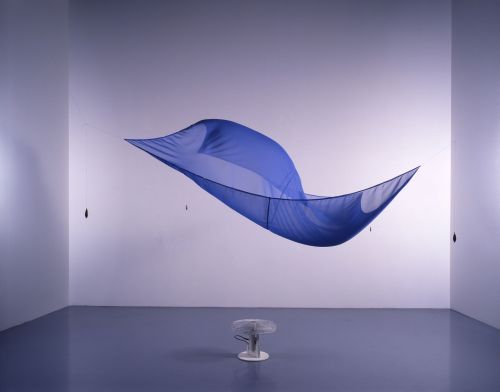 The Academy of France in Rome – Villa Medici – presents the Tapis Volants exhibition, from 30th May to 21st october 2012, organized by Philippe-Alain Michaud (Centre Pompidou), realized with the support of the Centre Pompidou, the Les Abattoirs Museum of Toulouse and in collaboration with the Textile Museum of Lyon, the Jacquemart-André Museum and the Quai Branly Museum.

What is a Flying Carpet? A mythical dimension, an expression of a fable, but also a definition of the ephemeral iridescent nature of craftsmanship that in its highest expression becomes an intellectual artistic project.

This is the starting point of the Tapis Volants exhibition, a worldwide journey from East to West, from past to present. An interpretation of modern and contemporary art that moves from the multifarious definition of the concept of carpet and its echo in the art of the XXth century. The term Tapis Volants comes from the Eastern tradition, and is associated with the idea of levitation, magic and nomadism.

The carpet, rolled and unrolled, is a metaphor for writing and music, prayer and war. It is the object of wandering and travel, evidence of the nomadic life to which it belongs

XXth century art has been fascinated by the carpet and this exhibition illustrates the course it has followed with rare masterpieces of antique Oriental carpets coming from French public collections (Musée des Tissus de Lyon, Musée Jacquemart-André et Musée du Quai Branly) together with sculptures and installations by American, European and middle East artists coming mainly from the modern and contemporary art collections of the Pompidou Centre: from Benozzo Gozzoli to Alighiero Boetti, from Carl Andre to Zilvinas Kempinas, passing through Rebecca Digne and Pierre Malphettes, with the visual art of Marijke van Wanderdam, up to Stan Brakhage’s films, coupled with priceless Ottoman carpets from the sixteenth century to the present day.

Curator Michaud writes: “Tapis Volant combines and confronts real carpets which, through their function (prayer carpets, war carpets, garden-carpets), their texture (silk carpet bouqalemoun) or their composition (in grille or semis, centred around a medallion), produce an effect of surface animation – with short films, like those realized with the ornamental “batik” technique (Harry Smith, “Abstractions”), or like the monochrome compositions inspired by the linear tracks of Navajo blankets (Paul Sharits, “Nothing”), or films on which blades of grass, leaves and beetle wings are glued with the carpet-garden technique (Stan Brakhage, “Mothlight”), or the positive/negative inversions that produce effects that are identical to the “motifs rentrants” (Peter Kubelka, “Adebar”), or the complex border interlacing by Hans Richter in “Rhythmus 21” .

Lastly, the exhibition offers a refined sound dimension with the presentation of a musical pièce by Morton Feldman, inspired by the collection of Coptic textiles in the Louvre museum in Paris.

Jack Storms: A Cold Glass Sculptor — One of Only Three in the US! Treasures of Mexico in Kansas City