Undercover of the night, the 35 sq m. mural entitled “Lambs of God” was removed from one of the wall in a desolate underground station in Warsaw. The work by Julia Curyło, one of the most interesting Polish artists of the new generation, was removed more than a month before the end of its presentation due to… the forthcoming Easter. This famous mural at the Marymont station, as well as other works of the artist, open a useful debate on the relation between the sacred and the secular at the beginning of the third millennium. 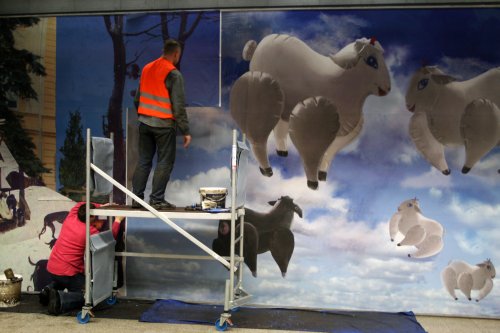 “Lambs of God” was supposed to be decorating the space above the platform until the end of April. However, due to the discontent of a large group of commuters with the mural’s subject, explicitly expressed by Paweł K. who ornamented the lambs with the notice “trash, not art”, the programme council, which is in charge of exhibitions at the Marymont underground station, decided to get rid of the troublesome animals as early as on 22 March. The forthcoming Easter was the major factor underlying the decision. In fear of being accused of an offence against religious feelings, „Lambs of God” was covered with a “safe” work by Anna Pisarska.

“(…) Julia refers to the tradition of the Polish Crown, the Polish painting which uses symbols to tell us about the world. Curyło sets her foot deeply in this tradition — her flock of lambs over the Warsaw Palace of Culture and Science refers to the whole tradition of symbolists,” says Leon Tarasewicz, a doyen of the Polish painting, commenting on Curyło’s work. We could be looking in vain for a better confirmation of the words of Prof. Tarasewicz than that provided by the events that Curyło’s “Lambs of God” triggered.

Julia Curyło’s art is highly intellectual. We are not able to decode its modern symbolism at the first contact with her work. This is art for demanding seekers, who do not accept reality as it seems to be at the first glance. Her paintings, overflowing with symbolism, hyper-realism and surrealism at the same time, touch issues avoided by the politically correct modern middle class. Apart from religious pop-culture, Curyło takes interest in the ambiguity of the modern world — piety against perversity, infantilism against maturity, morality against promiscuity. She analyses the contrasts through the attitude of the 21st century man to faith, mysticism and religion. She particularly focuses on the progressive commercialisation of faith, existence of pop-culture in religion, and the aesthetics of kitsch in the Catholic church. “The kitsch would neither evolve nor survive if it were not for the man who liked it and wanted to create it, as a piece of art,” (H. Broch, Kilka uwag o kiczu i inne eseje, Warszawa 1998, p. 103). Curyło makes the aesthetics of kitsch her tool, which she uses to appeal to popular tastes.

On the one hand, the Lambs of God depicted in the Curyło’s sensational work refer to the kitsch offered by the mass devotional business. On the other hand, they are a symbol of superficial faith which, like a soap bubble, may burst at the slightest gust of wind; piety with a taste of fraud.
However, these are not the plastic lambs’ bodies which are in the heart of the matter. Protests arose from a handful of commuters when they found out that such lambs were sold in sex shops as erotic toys. Curyło boldly responded to the accusation, saying that such lambs were sold in sex shops in John Paul II Street, which not only showed pertinently how fake that piety was, but also provided the best possible commentary to her work. Eroticism, familiar to all the appalled commuters in the privacy of their homes, was all of a sudden found to be spreading moral corruption, and caused early removal of her work, so as not to embarrass the underground passengers rushing home with bags full of plastic lambs [sic!], getting ready for Easter. The fact that the artist graduated from a catholic school only adds spice to the interpretation of her work. Accusations of unfamiliarity with the Christian religion and lack of understanding, often raised by her opponents, are nothing but ridiculous in these circumstances.

Civilization of the West eagerly involves in a discussion on the condition of modern Christianity and phenomena such as the “phase three” research on early Christianity and the figure of Jesus Christ. Conducted by such authorities as Géza Vermes, professor of Jewish Studies at the University of Oxford, the analysis of relations between the historical Jesus and the religious Jesus provides grounds for an interesting debate on religion, history and art. Julia Curyło has made the figure of Jesus the focal theme of her works, thus contributing to the mainstream of intellectual and artistic divagations on the relation of God and the man, the search for the historical truth about Jesus Christ, the discovery of the essence of relations between Judaism and early Christianity. Curyło’s art makes us reconsider, no less than the search conducted by the intellectual and spiritual elites of the West.

Curyło’s works are geographically rooted in Poland — a Catholic country of tradition. The events of the recent months have shown how strongly religious this country is. Following the judgement of the European Court of Human Rights in Strasburg in the case concerning the right to hang the cross on the wall in Italian schools (November 2009), Poland boiled with rage. The Court adjudged that a cross on the wall in a classroom might violate the freedom of conscience, and awarded damages for moral loss to a woman who wanted to bring up her children in the spirit of secularism. Outraged Polish Catholics fulminated against the “scandalous judgement”, claiming that “only under the cross Poland can be Poland and a Pole — a Pole” (Archbishop Andrzej Dzięga, Metropolitan Bishop of the Szczecin-Kamień diocese, in his homily during the service on the 18th anniversary of Radio Maryja, the popular catholic radio station, Toruń, 5 December 2009).

While the crisis of faith and secularization of the society have afflicted the Western Europe in the recent years, religion still strongly interferes in the life of the societies in the Central and Eastern Europe. As it turns out, it may lead to moves such as removal of a piece of art by a renown artist from a public space in fear of criticism from the catholic circles. Did the Town Hall and Ms Hanna Gronkiewicz-Waltz, President of Warsaw, privately a member of Opus Dei, also contribute to the decision to have the work removed? We don’t know. However, what we do know is that in the face of victory of hypocrisy, we must announce the victory of Curyło’s “Lambs of God”. The events it triggered prove that her art is and explicit and uncompromising statement on certain social phenomena, which hits the nail right on the head.