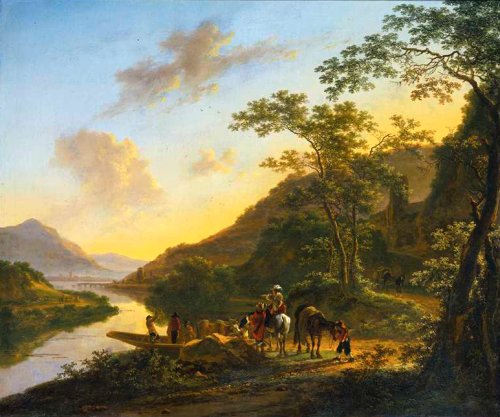 Starting on 22 February 2010, the Rijksmuseum at Amsterdam Airport Schiphol will be hosting the ‘Sunny Skies’ exhibition. The exhibition will feature nine works by Dutch 17th century landscape artists taken from the Rijksmuseum’s collection that were inspired by the Italian landscape and the incidence of light in Italy.

Dutch artists travelled to Italy regularly from the 16th century onwards to study the works of art from classical antiquity and the Renaissance. Once in Italy, the artists were inspired by the landscape and the Mediterranean light. From approximately 1640 onwards various Dutch artists focussed specifically on painting sunny southern landscapes. These artists included painters such as Jan Both (1618-1652), Jan Hackaert (1628-1685), Adam Pynacker (1620-1673) and Jan Asselijn (1610-1652) who each spent several years in Italy.

The works produced by these artists were exceptionally popular in the Netherlands. Known as ‘Italianists’, they had a major influence on the artists who remained in the Netherlands, such as Nicolaas Berchem and Albert Cuyp, who also took to painting Italian landscapes, even though they themselves had never been to Italy. This exhibition brings together a representative selection of paintings by the Italianists that together create a magnificent depiction of this major school in Dutch painting in the Golden Age.

ING is the exclusive sponsor of Rijksmuseum Amsterdam Schiphol.

The Sunny Skies exhibition at Rijksmuseum Amsterdam Schiphol will be open from 22 February.

Classic Contemporary From stage to painting