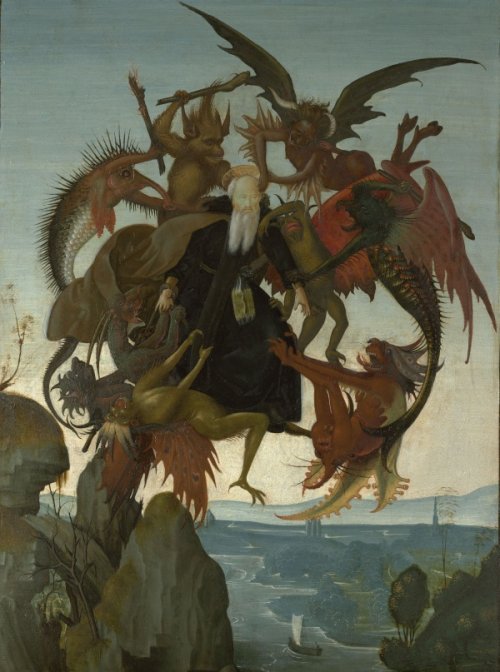 [ad#lb]
Michelangelo’s First Painting, a special exhibition beginning June 16 at The Metropolitan Museum of Art, will present The Torment of Saint Anthony, the first known painting by Michelangelo Buonarroti (Florence 1475- Rome 1564), believed to have been created when he was 12 or 13 years old. Recently acquired by the Kimbell Art Museum, the painting has undergone conservation and technical examination at the Metropolitan Museum. Michelangelo’s First Painting will run through September 7, after which the panel will return to the Kimbell Art Museum for display as part of its permanent collection.

Today, many people think of Michelangelo as a sculptor, but he received his early training as a painter, in the workshop of Domenico Ghirlandaio (1449-1494), a leading master in Florence. It was only in about 1490, following this apprenticeship, that he learned to carve marble. Michelangelo’s biographers – Giorgio Vasari (1511- 1574) and Ascanio Condivi (1525-1574) – tell us that, aside from some drawings, his first work was a painted copy after a well-known engraving by Martin Schongauer (1448-1491) showing Saint Anthony tormented by demons. To give his monsters greater veracity, Michelangelo went to the fish market to study the colors and scales of the fish. Made about 1487-88 under the guidance of his friend and fellow pupil Francesco Granacci, Michelangelo’s painting was much admired – it was even said to have incited Ghirlandaio’s envy.

Keith Christiansen, the Jayne Wrightsman Curator of European Paintings at the Metropolitan Museum, who analyzed The Torment of Saint Anthony and organized this exhibition, concludes: “The case for this panel being the one described by Condivi is exceptionally strong . . . and given what we know, the burden of proof that it is NOT the picture described by Condivi is with those who would deny it.”

Michelangelo’s First Painting will showcase recent technical examinations and scholarly analyses that identify it as the painting described by Michelangelo’s biographers. Though it has been known to scholars since the 1830s, when it was purchased in Pisa by a French sculptor, it has not always received proper attention. Accumulations of discolored varnish and disfiguring overpaints had obscured the qualities of the picture’s masterful execution and remarkable color palette. A careful cleaning, carried out by Michael Gallagher, the Metropolitan Museum’s Conservator in Charge of Paintings Conservation, transformed the painting, while infrared reflectography revealed how the artist modified and elaborated on Schongauer’s composition.
In addition to The Torment of Saint Anthony, this small, focused exhibition will include works from the Metropolitan Museum’s collection such as Madonna and Child and Triptych with the Crucifixion by Francesco Granacci (1469-1543); and Portrait of Michelangelo by Daniele da Volterra (1509-1566), a faithful follower of the master. Also on view will be a facsimile of the aforementioned Schongauer engraving, Saint Anthony Tormented by Demons.

The Torment of Saint Anthony is the first painting by Michelangelo Buonarroti to enter an American collection, and one of only four known easel paintings generally believed to be by him. The others are the Doni Tondo in Florence’s Uffizi Gallery and two unfinished paintings in London’s National Gallery, The Manchester Madonna and The Entombment.