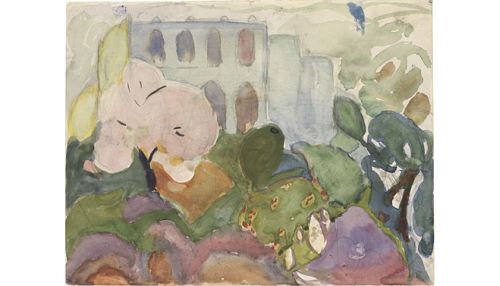 Siri Derkert is one of Sweden’s most prominent artists. Her oeuvre spans from early cubism to monumental works for public spaces. In this generous retrospective, Moderna Museet presents the entire compass of Siri Derkert’s art and gives insights into her personal life and political commitment to feminism, environmentalism and peace, issues that are as relevant today as they were then, for her generation.

Siri Derkert (1888–1973) was a major presence in 20th century Sweden, and several decades have passed since her artistic production was shown on a larger scale. The first major retrospective of a living artist at Moderna Museet took place in 1960 and featured Siri Derkert, who was 72 at the time. She was also nominated to represent Sweden in 1962 at the newly inaugurated Nordic Pavilion at la Biennale di Venezia. Now, half a century later, Moderna Museet presents a generous retrospective that includes her early works, her cubist paintings, fashion drawings from the 1910s, profound child portraits and life studies, drawings and later works in concrete, strip iron and clay. Derkert’s early cubist paintings belong to international modernism, while her later work for the Östermalmstorg underground station (1965) in Stockholm marked a radical change in the notion of public embellishment.

Siri Derkert’s fierce commitment to the causes of feminism, peace and environmentalism is reflected in many of her works and in what she said and wrote, making her one of Sweden’s most well-known and popular artists. This exhibition also documents the personal side of Siri Derkert, with photographs, films and recordings from radio broadcasts and interviews.