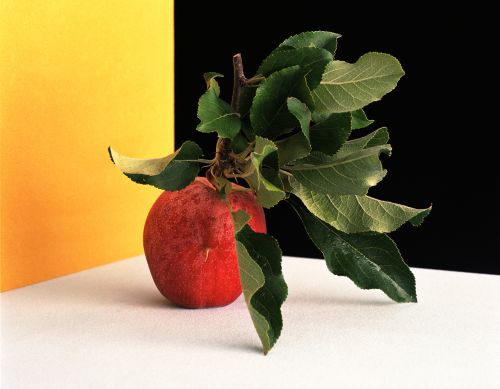 How real or abstract is photography? This question has preoccupied photography since its inception. As early as 1859 Oliver Wendell Holmes proposed photographing the world in its entirety, after which it could be burned down: “From now on, form is separated from material”. Alvin Langdon Coburn argued in 1916: “Why should not the camera artist break away from the worn out conventions and claim the freedom of expression which any art must have to be alive.” In the 1960s and 70s one spoke about “generative photography”, self-substantive photography, and the aesthetics of production. This general question has yet to be settled, and in recent years it has become highly relevant as a theme once again. Shining through in works by Wolfgang Tillmans, for example, is the notion that “all photographs are simultaneously representational and abstract, (they are) constructions that have gone through a series of translations and manipulations”.

For ten years Shirana Shahbazi’s work has alternated between the conflicting priorities of representation and abstraction, indexicality, and unrestrained imagery. During this time she has often arranged her images in startling combinations. For instance, abstract colour gradations are placed alongside two portraits, followed by a black and white step-like landscape, then a still life with berries and fruits, and finally two carpets, stitched together from photographs of a young man and a sun-drenched landscape. This sequence demonstrates how much she repeatedly wrestles with the question of representation in photography, how she plays with it in front of vividly coloured, monochromatic backgrounds, and also how she objects to and questions it.

There is a great sense of pleasure in images tangible in her works. Portraits, landscapes, city pictures, still lifes, and abstract colour fields are among the genres, the tools, of her art: staged, found, observed, captured, printed directly on photo paper or enlarged by sign painters into giant billboards, converted into wall papers and pasted up as patterns, as repeating designs, as backgrounds, or interlaced into carpets, into glowing, luminescent, warm picture carpets. Yet, repeatedly she has interfused her pleasure in images with doubts and questioning—until daring total immersion in colour, in abstract-concrete, glowing pictorial space. The newest works are primarily non-representational, large-scale geometric patterns and rhythmic layering of colour. Using abstract imagery, Shirana Shabazi creates a captivating, radiating immediacy.

Alongside many new and recent photographs, the exhibition at Fotomuseum Winterthur will present the (stretched) carpet that Shirana Shahbazi has worked on for nearly ten years. A book by Steidl, Göttingen, accompanies the exhibition.