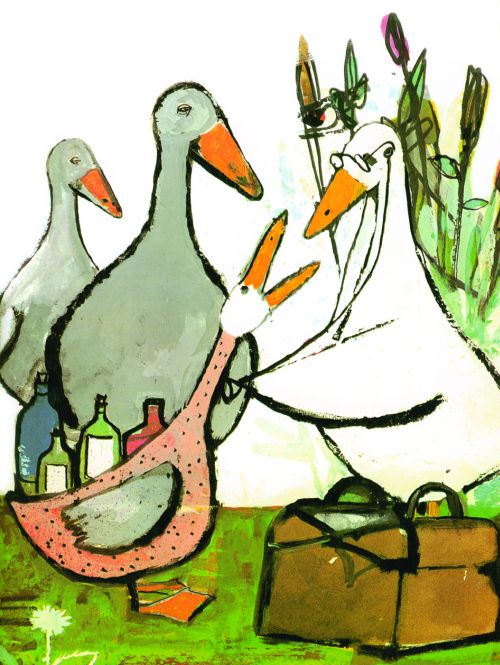 A celebration of the rich and varied career of John Burningham, one of Britain’s most distinguished and best-loved illustrators, is to be held at The Fleming Collection at 13 Berkeley Street, London W1 from 13 September to 22 December 2011. The retrospective exhibition, entitled John Burningham: An Illustrated Journey, will include illustrations, working drawings and previously unseen archive material. It will be accompanied by a new book about Burningham published by The Fleming-Wyfold Art Foundation, the charity that runs The Fleming Collection.

The artistic achievements of Burningham, who marked his 75th birthday earlier this year, have been extraordinary. He is both the author and illustrator of many children’s books, did the illustrations for Chitty Chitty Bang Bang by Ian Fleming, and produced a series of superb travel posters which will go on show in a simultaneous exhibition at The London Transport Museum. The Fleming Collection, which has become an embassy for Scottish art in London, will also show sketches from Burningham’s time working on slum clearance schemes in Glasgow in the 1950s.

Burningham was born in Surrey in 1936 and attended nine different schools, including Naemoor, near Dunfermline, and Summerhill, A.S. Neill’s famous alternative school where lessons were not compulsory. There, helped by an excellent teacher and a great deal of time spent in the art room, he laid the foundations for his life’s work. On leaving in 1953 he registered as a conscientious objector rather than do National Service in order to please his pacifist father. Among a variety of tasks that he carried From Burningham’s Glasgow sketchbooks Borka, the Goose With No Feathers out during this period of non-military duties was slum clearance in the Govan district of Glasgow and some of his sketches of life in this tough, industrial environment will be included in the exhibition. On the strength of these he was fast-tracked onto a course in graphic design and illustration at the Central School of Arts and Crafts in London, where he met fellow student Helen Oxenbury, who he married in 1964. She is also a well-known illustrator of children’s books.

Burningham’s first break came when he was commissioned by London Transport to design a poster for them. Please avoid the rush hour appeared in 1961 and eight further posters followed along with other work for the British Transport Commission.
Some of these will be included in The Fleming Collection’s exhibition and the full range will go on show at The London Transport Museum in Covent Garden Piazza, London WC2 from 12 September to 2 December 2011. The first children’s book written and illustrated by Burningham was Borka: The Adventures of a Goose With No Feathers published in 1963, which was awarded the Kate Greenaway Medal for illustration. Many other books followed, including Mr Gumpy’s Outing, for which Burningham won a second Greenaway Medal, and he is still inventing and illustrating stories to the delight of readers of all ages.

The success of Borka led to a commission to illustrate Chitty Chitty Bang Bang, the only children’s book written by Ian Fleming, author of the James Bond novels and grandson of Robert Fleming, founder of Flemings bank. The Fleming Collection, now an independent charity, grew out of the corporate collection of Scottish art set up by the bank. Burningham made his own model of Chitty and suspended it from the ceiling using fishing line before taking photographs of it from every angle. The remains of the model, now minus its wings, and some of the original working drawings will go on show in the exhibition at The Fleming Collection. Burningham recalls that the only change that Fleming, a heavy smoker, made to his illustrations was to ask for the addition of a striped Tabac sign to a drawing of Paris.