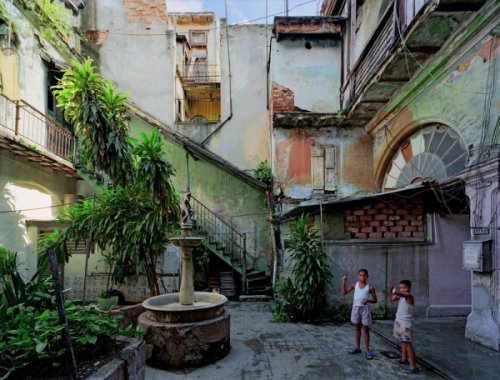 [ad#lb]
Why wouldn’t the walls have recorded and layered, one on top of the other, all the emotional vibes of the rooms’ successive occupants and visitors? That is the question that has obsessed photographer Robert Polidori for over twenty years, and that makes his photographs of interiors and exteriors so moving and haunting, long after we have seen them. In its ongoing series of major exhibitions devoted to contemporary photographers, the Musée d’art contemporain de Montréal presents Robert Polidori from May 22 to September 7, 2009.

Considered one of the leading photographers of our time, Polidori transcends the limits of photography and captures traces of the human condition—paradoxically, in places that have usually been abandoned and are devoid of human presence. Each photograph amounts to a social portrait, revealing the soul of its various subjects, and layering both past and present in poignant works steeped in sorrow and beauty.

The exhibition offers a survey of Polidori’s practice through fifty-nine large colour photographs, including works from the main series he has produced in the last twenty-odd years, from 1985 up to 2007. First, the Versailles series, in progress since 1985, brings to light the successive restorations undergone by this highly symbolic site that is part of our collective memory, awakening in viewers a pervasive sense of history. In the photograph Velours Frappé and Ladder, for example, the passage of time is made visible through a series of enfilading openings. The near-painterly Beirut (1994-1996), with its subtle colours and rendering of line and material, offers glimpses of the city’s ruin that foreshadow the apocalyptic visions of the series that would follow. Havana (1997-2000) attests to a dual-faceted urban reality: the splendid past of these sumptuous colonial homes and the dilapidated present state of the same houses. Pripyat and Chernobyl (2001) makes us all witnesses to the worst nuclear catastrophe in history, which occurred in 1986. It reverberates with exile, devastation and abandonment. The destruction is complete in the series New Orleans (2005-2006), produced in the months that followed the dreadful Hurricane Katrina.

Complementing these works is a 1985 series focusing on New York and a critical exploration of the urban landscape through the buildings of Amman, Jordan (1996) and the streets of Varanasi, India (2007).

“Where you point the camera is the question,” writes the artist, “ and the picture you get is the answer to decipher.” Answers that will go straight to the core of your being.

Born in Montréal in 1951, Robert Polidori lives and works in New York. In 1969, when he was at college in Florida, he saw the Michael Snow film Wavelength—for him, a life-changing experience. He went to New York, where he worked as an assistant to Jonas Mekas at Anthology Film Archives. During the seventies, Polidori made a number of avant-garde films that examined the temporality between still and motion. He earned an MFA from the State University of New York in 1979 and began devoting himself full-time to photography. In 1998, he became a staff photographer for The New Yorker. Reading the book The Art of Memory by Frances Yates introduced him to mnemonic systems and the central role that rooms play in “memory theatres.” This revelation would be critical to his work, and to his “reading” of the layers of memory that have built up in the rooms and spaces he photographs. His work as a photojournalist has taken him all over the world and allowed him to pursue his artistic career at the same time. Polidori has participated in numerous solo and group exhibitions. In 2006, he was the subject of a show at New York’s Metropolitan Museum of Art. The exhibition at the Musée d’art contemporain is his first retrospective. It was curated by Paulette Gagnon, Chief Curator at the Musée.

After its Montréal run ends, the exhibition will travel, starting in October 2009. We would like to express our thanks to the RBC Foundation, Camera Work, Berlin, and Steidl Publishers, Göttingen, for their generous support to the realization of this exhibition.

Jane Hammond: Fallen Out of the Commonplace: The Folk Art of Delaware