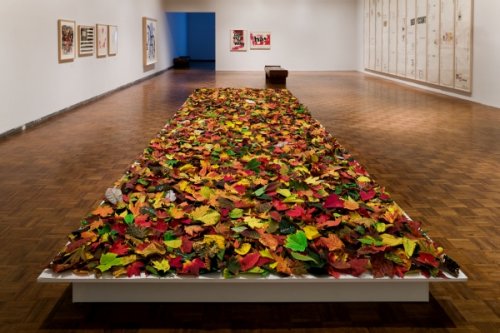 [ad#lb]
Jane Hammond: Fallen will be on view at the Museum of Contemporary Art San Diego’s downtown location from April 26 through July 5, 2009. The artwork is comprised of a low platform covered with over 4,000 digital prints of unique leaves, each inscribed with the name of a U.S. soldier killed during the war in Iraq.

The artist began the open-ended artwork in 2004, the year after the U.S. invasion of Iraq, and the first exhibition of the work was at Lelong Gallery in Chelsea, New York City in spring 2005 with more than 1,500 leaves. The artist continues to add leaves to the installation as more soldiers have died in Iraq. As the number of leaves has grown, so has the size of the platform on which they are displayed, which originated at 12 feet and is now approximately 24 feet by 7.5 feet and stands at 15 inches high.

Fallen has also been exhibited at the Whitney Museum of American Art in New York City; the Mildred Lane Kemper Museum at Washington University in St. Louis, Missouri; and the Wexner Center for the Arts at Ohio State University in Columbus, Ohio.

This is the artist’s first work to address a political subject, and she has stated that the work “has at its heart our collectivity.”

Hammond has gathered leaves from throughout the United States for the project, including maple, oak, American horse chestnut, sweet gum, silver linden, catalpa, birch, and black alder, among others. The variety of tree species Hammond includes in Fallen extends the metaphor of the leaves to reflect the diversity of women and men lost in the present conflict in Iraq. Each fallen soldier is represented by a unique, actual leaf.

The artist digitally scans each leaf, precisely aligning the front and back scans onto a single sheet of archival paper. After cutting each leaf by hand following its unique contours, Hammond paints and handworks the leaf to resemble the original. She inscribes the deceased soldier’s name on the leaf in sumi ink.

The Museum will be open on Memorial Day (Monday, May 25, 2009), and the gallery with Fallen is expected to be a space conducive to solace and reflection. Visitors will be able to reflect on the artwork by writing in a comment book available in the galleries during the duration of the exhibition.

Artist Talk
Jane Hammond will give a gallery talk on Fallen on Saturday, April 25 at 4 pm at MCASD Downtown’s Jacobs Building (1100 Kettner Blvd.).

Exhibition Support
Jane Hammond: Fallen was organized by the Whitney Museum of American Art, New York. Its exhibition at MCASD is made possible by a generous gift from Sheila Potiker.