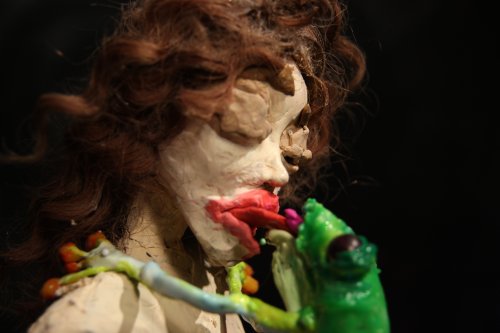 Giò Marconi Gallery is pleased to announce Nathalie Djurberg’s second solo exhibition “Snakes know it ’s Yoga”, which was done together with her collaborator and composer Hans Berg. The exhibition will be held on the ground and underground floors of the gallery and will be on from June 1 until July 24, 2010.

On display in the gallery will be 60 puppet sculptures that are presented in 41 plexiglass boxes positioned on wooden plinths. Two new films which are accompanied by soundtracks of Hans Berg that are underscoring and intensifying the works are especially made for the exhibition.

The sculptures, that are all self-formed figures of plasticine and cloth are characters that derive from Western to Eastern religion and out of a mythological context:
It is a world of holy men, martyrs, ascetics and fairy tale creatures who search for spiritual and religious enlightenment: there are, for example, the three men that are flagellating themselves, there is the skinny old man dangling from the twig of a tree. Another man is positioned in the midst of a field of blooming cactuses with long and sharp thorns. Another one is given water by a fairy that seems to have stepped down right out of heaven and yet another ascetic looking man is strung to a bed of nails.

Eight of these plinths on which all the various sculptures are being shown have different neon tubes in pink, blue, yellow and red attached to the edges of their plexiglass covers. They are symbolizing the characters’ cathartic journey from the depth of the purgatory and darkness into a literally enlightened state of mind.

In one of the new videos that is realized in the typical stop motion technique Djurberg is known to work with, the main protagonists are a naked, red haired woman and a frog with whom she is interacting. The frog is holding a prominent role in the shamanic tradition: by licking frogs that secrete a venomous substance the shaman gets into a psychedelic state of mind through which he can access the spiritual world.

In September, the whole exhibition will be shown at the Kestnergesellschaft in Hannover, Germany where it will be on display until November 7th 2010.