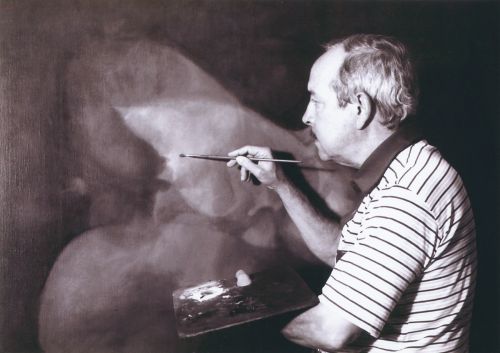 Cuban-born painter Rafael Soriano is one of the major Latin American artists of his generation. Soriano broke with regional and folkloric themes which once dominated Cuban art in the mid-twenties. Soriano first mastered geometric abstraction as a style in the 1950’s, but by the late 1960’s had defined his signature approach to painting. His work embodies a style best described as ‘Oneiric Luminism’ combining a purely abstract form of light, form space and shadow with an interest in poetic and metaphysical impulses.

Rafael Soriano: Other Worlds Within, a Sixty Year Retrospective will be on view at the University of Miami Lowe Art Museum from January 29 – March 27, 2011. A preview lecture and reception will be held on January 28 from 7-10 pm. The lecture will be given by Dr. Alejandro Anreus.

Born in 1920 in the town of Cidra in the province of Matanzas, Rafael Soriano manifested an early inclination for painting. After completing seven years of study at Havana’s prestigious Escuela Nacional de Bellas Artes San Alejandro, he graduated in 1943 as Professor of Painting, Drawing and Sculpture. He then returned to Matanzas where he taught visual arts for close to two decades. He was one of the founders, and later Director, of the Escuela de Bellas Artes de Matanzas, the most important art school in Cuba outside of Havana.

In 1962 Soriano went into exile, settling in Miami with his wife Milagros and his daughter Hortensia. He worked as a graphic designer and occasionally taught, first at the Catholic Welfare Bureau, and later at the Cuban Cultural Program of the University of Miami.

The exhibition is organized by the Lowe Art Museum and curated by Jesus Rosado.