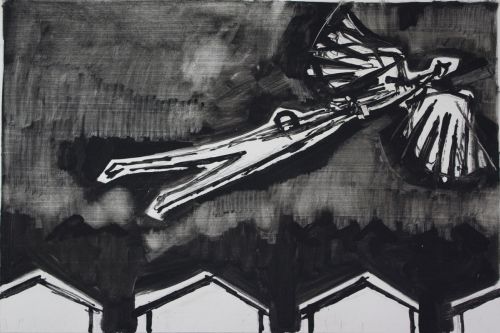 There are fewer and fewer people today who saw the Holocaust with their own eyes, and can tell the story first-hand. Si Lewen, 92, is one with a gift to recount the story not only in words but in haunting and powerful images. None other than Albert Einstein said of Lewen: “Our time needs you and your work.”

The James A. Michener Art Museum is presenting Si Lewen: A Journey, December 4 through March 6, 2011, in the Pfundt Gallery. Mr. Lewen will be at the Museum December 7 for a Meet-the-Artist program. The exhibit is sponsored by Mary Lou and Andrew Abruzzese, The Pineville Tavern.

“Sadly, we live in an age when the most horrific events in our history—events that we desperately need to learn from and remember—are ignored, forgotten, and even denied,” says Brian H. Peterson, the Michener’s Gerry and Marguerite Lenfest Chief Curator. “Si Lewen experienced a true journey into darkness, but in his series ‘A Journey,’ he both confronts and, ultimately, transcends evil. His creativity and courage are an example to all.”

Ever since he was 5, Lewen found refuge in painting, and began his art training in Berlin and Grenoble, France,

Born in Poland in 1918, Lewen’s family fled to Berlin when he was an infant, imagining Germany to be a better place for Jews. Once there, Lewen was taunted, harassed and beaten, and at age 14 he escaped to France with his brother.

In 1935, with help from his Uncle Jack and Sen. Harry Byrd of Virginia, Lewen emigrated to New York City. But even in his promised land, he was beaten, robbed and threatened by a racist police officer in Central Park. After all he had endured, this experience, as well as his fear of the policeman’s threat, took him over the top and led to a suicide attempt and subsequent hospitalization.

Determined to fight anti-Semitism and Nazism, he enlisted in the U.S. Army and used his native tongue to help get Germans to surrender.

After the war, he resolved to overcome his trauma by returning to art. In the late 1930s he began to study at the National Academy of Design and the Art Students League in New York. Success ensued in the form of gallery shows, sales and good reviews, the publication of his graphic work and shows at the Whitney Museum of American Art, the Brooklyn Museum of Art and the Pennsylvania Academy of the Fine Arts.

Continuously haunted by his wartime experiences, Lewen began to work on a narrative series of more than 70 works on paper titled A Journey, which tells the story of an imaginary visitor to a concentration camp. Unfolding like a novel without words, the series documents the visitor’s horror at what he sees, but goes further, as the visitor is asked to join the leaders of the camp in a macabre “dinner of death.” When he refuses, he suffers the same fate as the camp’s many residents, and the series ends with a kind of resurrection as his spirit flies up to the heavens.