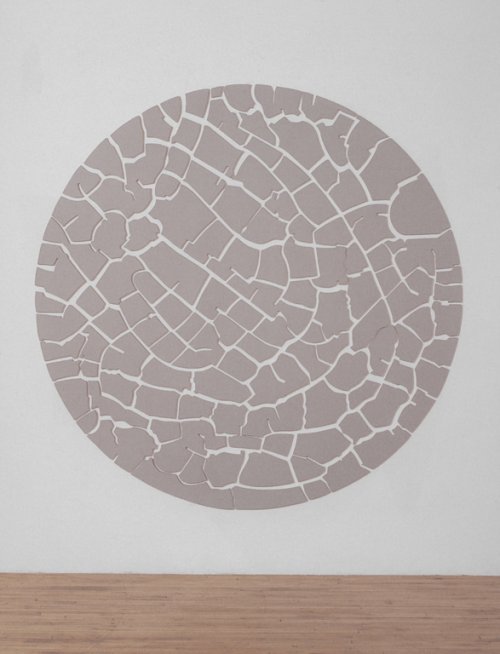 [ad#lb]
She’s unpacking her library at the Musée. And yet she’s neither a writer nor a librarian, but rather an artist who has a passion for words and painting, and whose work is in the tradition of Québec abstraction. From October 10, 2009 to January 3, 2010, the Musée d’art contemporain de Montréal presents the exhibition Francine Savard.

For the past fifteen years, Francine Savard has explored the medium of painting, making it the very subject of her art. Her work is rich in references to the history of art, its writings and meanings, the studio and the painter’s tools. Taking the form of variously shaped, monochromatic canvases, her works intermingle, with poetic flair, formalist and conceptual approaches, art and language, art history, literature and geography, while offering a fresh interpretation of the vocabulary of painting.

The exhibition
This mid-career retrospective presents some sixty pieces produced by the artist between 1992 and 2009. Among the paintings featured is Promenade en 56 tableaux, 1993, which introduced the notion of mapping that would become a dominant feature of her subsequent work. In this first example, the starting point is an art tourist’s map of the Marais neighbourhood in Paris. In Le Dépôt de peinture, 2000, the mapping is inspired by a cracked surface discovered at the bottom of a can of paint.

Savard’s reading of two publications on the work of Québec artist Fernand Leduc was the impetus for the series Un plein un vide, 2001, in which she attaches the pictorial qualities they describe to shapes derived from Leduc’s paintings. The title Les Couleurs de Cézanne dans les mots de Rilke, 36/100 – Essai, 1998, refers to letters that Rainer Maria Rilke wrote to his wife about the paintings of Cézanne. Fascinated by the poet’s rich vocabulary, Savard imagines what “du blanc comme couleur” or “jaune d’un vert terreux” might look like. A decade later, she takes on another monument of modern art, Marcel Duchamp’s Tu m’, 1918, which he himself considered a summary of his previous works and concerns. This artistic legacy provides the inspiration for Savard’s most ambitious work to date, Tu m’, un dernier tableau, 2009, a spectacular transposition of the famous colour chart into real space: a curve seven metres long that extends out from the wall, forming a transition between two and three dimensions. This “last painting” touches on the illusory nature of two-dimensional perspectival space and the debate about the death of painting. It concludes, and brilliantly sums up, this survey of an artist in mid-career that takes us on a journey to the very heart of painting.

The artist
Francine Savard is part of a generation of Québec painters, including Guy Pellerin, Monique Régimbald-Zeiber and Stéphane La Rue, who explore the formal vocabulary of abstract painting and probe the boundaries between abstraction and figuration, between painting and sculpture and, for Savard, between art and language.

Born in 1954, Savard studied graphic design at the Université du Québec à Montréal (UQAM) and the Royal College of Art in London in the 1970s before turning to the visual arts, and earning an M.F.A. from UQAM in 1994. She gained critical notice with her first solo exhibitions, including La chambre à peinture at Galerie B-312 Émergence in 1997, “Muséumification” at Montréal Télégraphe in 2001, Un plein un vide at Galerie René Blouin in 2002, Vol d’un carré de toile at Blouin and A Square of Canvas at Toronto’s Sable Castelli Gallery in 2004, and Suite at Diaz Contemporary, also in Toronto, in 2008. She has taken part in a number of group shows, such as Le mensonge de la couleur at Montréal Télégraphe and the Peinture Peinture event in 1998, Lines Painted in Early Spring at the Southern Alberta Art Gallery in Lethbridge in 2003 and De l’écriture/With Writing: Works from the Collection of the Musée d’art contemporain de Montréal in 2006. The latter two travelled extensively in Québec and the rest of Canada. The current exhibition is the first retrospective devoted to the artist. Savard is based in Montréal, where she enjoys a dual career as a visual artist and graphic designer, reflective of her twin-faceted training.

Organization and tour
The exhibition was organized by Lesley Johnstone, curator at the Musée. The works come from the collections of the Musée national des beaux-arts du Québec, the National Gallery of Canada and the Musée d’art contemporain de Montréal. A tour of the exhibition is planned by the MAC to begin in April 2010, following its Montréal presentation.

Catalogue
A bilingual, 100-page catalogue has been published to accompany the exhibition. It contains essays by Lesley Johnstone, Musée and exhibition curator, and Catherine Bédard, Director of Visual Arts at the Canadian Cultural Centre in Paris, along with a list of works, a biobibliography and numerous colour reproductions. The publication may be purchased for $29.95 at the museum’s Olivieri Bookstore or from your local bookseller.

Meet the artist
Francine Savard will meet the public just before the opening, on Friday, October 9, at 5 p.m. in the exhibition galleries. The event will take place in French.

On the Scene Embrace!