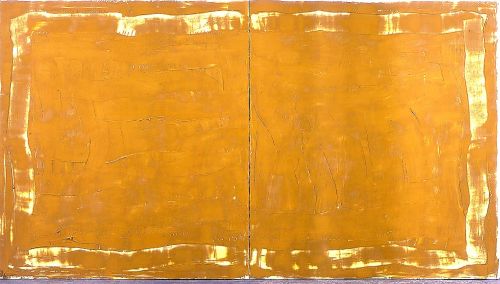 Joan Hernandez Pijuan (1931-2005) is one of the most celebrated Spanish painters of the last decades. He produces compositions through uniform planes of neutral color in a simple yet expressive style. Pijuan has received many honors and prizes and is reckoned among the most significant European artists of the 20th & 21st centuries.
Pijuan was born in 1931. In 1956, he graduated from the Higher Fine Art School in Barcelona. In the late 1950s, he lived and worked in Paris, studying etching and lithography. He defended his thesis titled “Painting and Space: Personal Experience of Perception”. In the 1980s, he ran a contemporary art studio at the Fine Arts Museum in Madrid. In 1997, he became a member of the Academy of Fine Arts in Madrid.

Pijuan deals with classical painting materials, i.e. oil on canvas and paper. His style demonstrates several features. Firstly, it is primitivism, it reminds of the children’s art. Secondly, the painter plays with the canvas space. He either fills it with repeated patterns or leaves it almost completely empty. Patterns are moved to the very edges of the canvas; color and texture become a center of the composition. The third feature is a complicated texture, which along with coloring brings the abstract landscape closer to the real one.

His art is a national painting of the artist, who didn’t want to lose touch with his origins in order to please the all-European and global tendencies, characteristic of the contemporary art practice. His mother was a village resident. During and after the war, Pijuan resided in Segarra. He was appreciating landscapes of the region. Recollections of the landscapes devoid of people influenced much upon his life and his oeuvre. Nature has always been a leitmotif of his works. There’s a road, a field, a garden, a hill, a tree, a house and a meadow. It is extremely interesting to observe how the same landscapes experience fanciful plastic and graphic metamorphoses in the artist’s works. The exhibition in Moscow Museum of Modern Art invites the viewers to follow the development of Pijuan’s oeuvre, from the earliest artworks to his late paintings where the substance completely replaces the form.