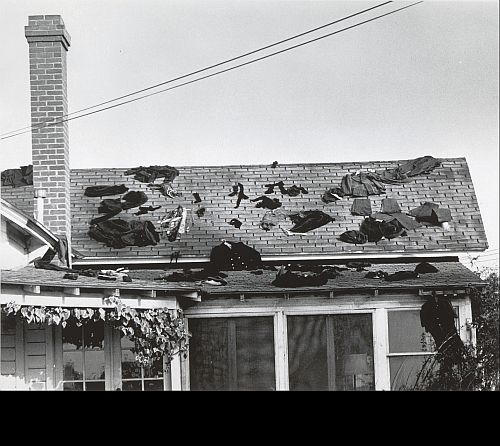 Bas Jan Ader. Tra due mondi is the first retrospective dedicated to Bas Jan Ader in Italy, curated by Javier Hontoria and organised by MAMbo – Museo d’Arte Moderna di Bologna (Istituzione Bologna Musei).
The title alludes to the condition of being constantly in transit, between the Old and New World, between the subjectivity inherent to the romantic drift and cold impersonality of Conceptual Art, between the extreme rationalism of Mondrian and the vibrant absurdity of slapstick comedy.

The legendary aspects distinguishing Bas Jan Ader life and work and the emblematic value of many of his works have made him a key figure in contemporary art. Born in 1942 near Groningen in the Netherlands, in 1975 he was lost at sea while attempting to reach Ireland aboard a small 4-metre-long boat. He left the Massachusetts coast for a voyage that was to have been part of his project In search of the miraculous.

The exhibition explores the relationship between man and nature, interpreted by Ader from a Romantic viewpoint; it also focuses on the concept of melancholy, one that finds its roots in the European Renaissance thinking, in Dürer and in humanist Florentine thinking of the 15th century. Simultaneously, it features constant references to his fellow countryman Piet Mondrian while giving shape to an existentialist drive. It is under this light that his famous “falls” emerge, a topic that stands close to the legacy of authors like Albert Camus or Samuel Beckett, the American slapstick comedy of the 1920’s and the work of those that took failure and the absurd as their central themes. Ader is also one of the most original figures to have re-drafted the essential features of Conceptual Art, thrusting aside its formal rigour in favour of a more personal and evocative language.