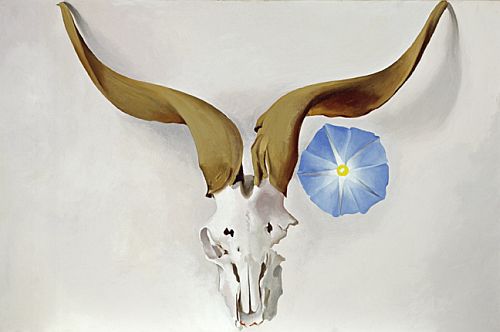 Georgia O’Keeffe in New Mexico: Architecture, Katsinam, and the Land, opening February 10 and running through April 28, 2013, brings to light a relatively unknown aspect of Georgia O’Keeffe’s art and thinking—her deep respect for the diverse and distinctive cultures of northern New Mexico. The exhibition features 53 O’Keeffe works including 15 rarely seen pictures of different Hopi katsina tihu, along with examples of these types of figures. Chronicling her artwork created in New Mexico, the exhibition explores O’Keeffe’s paintings of New Mexico’s Hispanic and Native American architecture, cultural objects and landscapes.

Georgia O’Keeffe (1887–1986) began spending part of the year living and working in New Mexico in 1929, a pattern she rarely altered until 1949. She then made northern New Mexico her permanent home three years after the death of her husband, celebrated photographer Alfred Stieglitz (1864–1946). In addition to her astonishingly beautiful New Mexico landscapes, O’Keeffe was also inspired to paint some of the area’s churches, crosses and folk art as well as Native American subjects, such as architecture and katsinam tithu, commonly referred to as kachina or katsina dolls.

Between 1931 and 1945, O’Keeffe created numerous drawings, watercolors and paintings of katsinam tithu. Because she retained and seldom exhibited most of these paintings, they remain generally unknown to the public. The DAM exhibition also will showcase a selection of American Indian artworks including katsinam tithu figurines, providing viewers with an up-close look at the various cultural artifacts the artist was exposed to during her time in New Mexico. Georgia O’Keeffe in New Mexico is included in general admission.