The partnership between the three nations sharing the Nordic Pavilion in Venice – Sweden, Finland and Norway – will try a new concept for the next three biennials. The previous requirement that all three countries should be represented by artists will be set aside to enable solo exhibitions. Sweden, which is responsible for the Nordic Pavilion in 2011, will thus be presenting two separate projects.

The artists Fia Backström and Andreas Eriksson are currently producing new works for the Biennale. Once these projects have reached a more mature stage, they will be presented in a new press release. 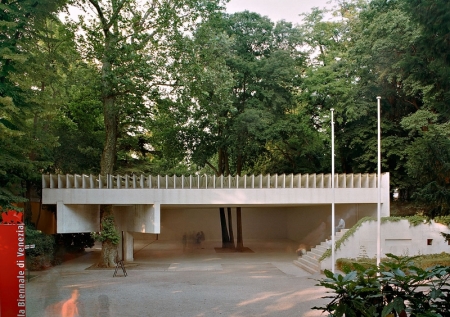 Fia Backström (b 1970) has enjoyed increasing international acclaim in recent years. For more than a decade, she has been living and working in New York, participating in numerous exhibitions and projects, including the Whitney Biennial in 2008 and Performa in 2009. In this year’s edition of the Moderna Exhibition, she was featured with the work The Worker Through the Ages, presented as a performance, and documented to be shown for the remainder of the exhibition.

Fia Backström produces events, performances and projects that challenge our habitual notions of what constitutes an exhibition – its institutional context, the dialogue with the audience, and even the works of art that are presented. Occasionally, she incorporates works by other artists in her productions. She chooses her methods and media according to the situations and themes that preoccupy her at the time, but returns constantly to politics, authorship and the capacity of images to generate meaning.

Andreas Eriksson (b 1975) employs a variety of techniques and media, including painting, sculpture, photography, installation art and, more recently, film. He works conceptually, but with a finely-tuned visual sensibility. In 2007, he was awarded the Art Balois Prize at the Art Basel Statement. He had a major solo exhibition at the Museum Moderner Kunst Stiftung Ludwig in Vienna in 2008, and has participated in numerous group exhibitions.

In recent years, his work has been intimately linked to the place where it is created, the rural terrain outside his studio in Västmanland. In the late 1990s, Andreas Eriksson was living and working in Berlin, caught up in an intense phase of his burgeoning international career, with numerous major exhibitions, when he began to suffer from electromagnetic hypersensitivity. He was forced to move far away from the city, from densely populated areas, and the electromagnetic fields of urban life. Andreas Eriksson’s art has always been strongly associated with the context in which it is produced, his life and surroundings. In consequence, these radical changes in his existence are also reflected in his work. Trivial events and observations from everyday life and nature set off his metaphorical and existential contemplations.