The Miniature Worlds of Bruce Metcalf

The Miniature Worlds of Bruce Metcalf Offers Riveting Look at Big Issues
Exhibition on view at the Mint Museum of Craft + Design February 21 – May 17, 2009 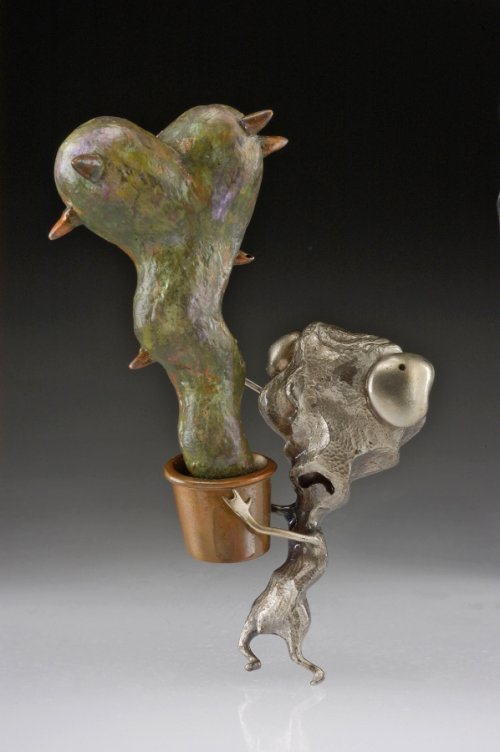 [ad#lb]
The engaging and spirited work of prominent art jeweler Bruce Metcalf will be on view in the exhibition The Miniature Worlds of Bruce Metcalf at the Mint Museum of Craft + Design this spring. This first major exhibition of the artist’s work examines social, moral and political issues in relation to Metcalf’s interests in architecture, comics and the narrative voice.

In this show, small size matters. Cast in silver or carved in wood, Metcalf’s tiny characters act out issues on the stage of miniature worlds. Most of his pieces serve dual purposes as both sculpture and wearable brooches in which the characters “venture” out into the world and engage the unsuspecting viewer with their stories.

As Metcalf has observed, “the miniature can only be entered through an act of imaginative projection. Looking at small objects, viewers will get very close and the object will fill their field of vision. There’s no scale in the imagination, and very small things can become psychologically large.”

The Miniature Worlds of Bruce Metcalf features 76 pieces by the artist, dating from the 1970s to 2001. Taking center stage are Metcalf’s emotional characters, distinguished by their distorted bodies that manifest inflicted pain from human nature’s “dark side.” Big-headed with atrophied limbs, all of Metcalf’s figures are born from cartoon traditions, yet appear strangely credible as they address the artist’s overarching themes of the human condition and issues of dissent.

Also featured is a train layout with trompe l’oeil surfaces created by the artist. This miniaturized world is based on an imaginary winter in a train station near Munich, Germany. In exhibiting this scene, Metcalf seeks to help the viewer understand how miniature worlds may act upon us and how his miniature worlds differ from those in the public imagination.

Born in 1949, Metcalf has long been revered as a leading art jeweler, curator, essayist and critic of contemporary craft. His work has been featured in major exhibitions at venues such as the American Craft Museum in New York and the Renwick Gallery of the National Museum of American Art, Smithsonian Institution in Washington, D.C. Most recently, he co-authored Makers: 20th Century American Studio Craft, to be published by the University of North Carolina Press in late spring 2009.
The exhibition is accompanied by a 120-page full-color catalogue available for purchase in The Mint Museum Shops (704/337-2061).

From the Melting Pot into the Fire: Contemporary Ceramics in Israel Ai Weiwei: According to What?