Painting the People: Images of American Life from the Maimon Collection 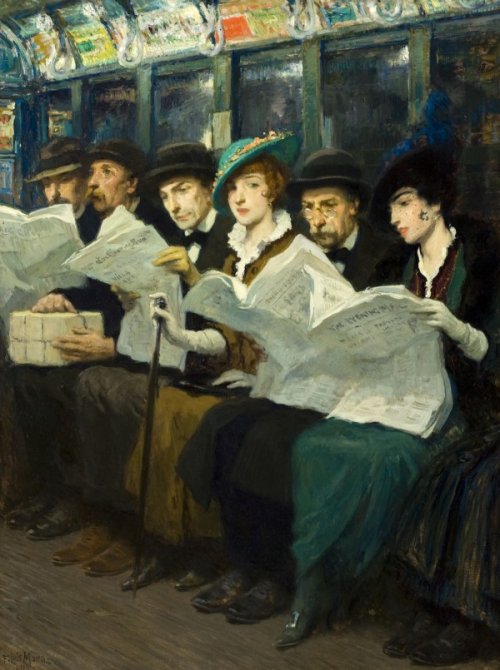 [ad#lb]
The grittier side of life will be on display in the upcoming exhibit Painting the People: Images of American Life from the Maimon Collection, which opens July 11 and runs through October 18, 2009 at the James A. Michener Art Museum. Regional collectors Barbara and Lee Maimon have amassed a formidable number of paintings that explore the uniquely American art forms known as American Scene painting (or Regionalism) and Social Realism. Organized by the Michener, Painting the People allows us to view the everyday lives of ordinary people, as seen through the eyes of artists who looked closely at the reality around them—from mine workers to burlesque dancers to regular folks worn down by life—and painted what they saw.

Beginning around the turn of the 20th century and fueled by the often-appalling social conditions of the age, this movement reached its peak in the 1930s when American artists strove to be free of European artistic influences. Many of these painters had experienced first-hand the privations and suffering of the Great Depression, enabling them to produce work that was edgy and thought-provoking—realism with a purpose.

Many of these paintings are bright and colorful, drawing in the viewer with their vibrancy. On closer inspection, however, social messages become apparent. The plight of the poor, homeless, and hopeless is depicted and celebrated—the couple that spends evenings in a bar, smoking cigarettes and talking; the fishermen whose yellow slickers shine with brine as they struggle to bring in their catch; the tired slouch of office workers heading home on the subway, noses buried in the day’s paper; and the hopelessness of half-clothed female burlesque dancers.

“Proper works of art were not supposed to remind people that their world was squalid and dirty. Artists weren’t supposed to be empathic toward the unfortunate,” says Brian H. Peterson, Gerry and Marguerite Lenfest Chief Curator at the museum, speaking of the tradition of narrative and history painting that had dominated Western art in previous centuries. “While our focus is on the landscape tradition at the Michener, we feel it’s important to share this honest look at the human condition with our audience, especially given the economic turmoil we’ve all been experiencing.”

One of the grittier, more impressive pieces in the exhibit is Miner’s Lunch painted in 1948 by James Turnbull. Two miners hunch over tin lunch pails and hold sandwiches illuminated by the orbs of their miner’s headlamps. Their torn, dirty clothing and filthy faces etched with lines of exhaustion tell us these men are weary and resigned to a life with no hope. Yet, the honesty of this work turns their tragic lives into something beautiful.

“This painting grabs you and forces you to feel what these miners felt,” explains Peterson. “This is what these painters did so skillfully. They were not amateurs; they were professionals who chose to devote their lives and work to helping others. They produced paintings that reveal the struggles and triumphs of their age, but also reach beyond their age to touch our common humanity.”

The passion, energy and empathy exhibited in these paintings are what drew Barbara and Lee Maimon to them. “We like pictures that are true to the human experience, that give us a glimpse of people’s lives,” says Barbara Maimon.

A companion book by Peterson titled Painting the People: Images of American Life from the Maimon Collection will be available in the museum gift shop; the publication features twenty-one color plates as well as biographies of each artist in the exhibition

As part of a related lecture series, Peterson will discuss the exhibit from 1 to 2 p.m. Tuesday, Oct. 6, 2009 in the Ann and Herman Silverman Pavilion. Admission is $10 for members/ $20 for non-members and includes admission to the museum. Advance registration is required by calling 215-340-9800.

Annual support for the Michener Art Museum is provided by The Pew Charitable Trusts, the Bucks County Commissioners and the Commonwealth of Pennsylvania Council on the Arts.