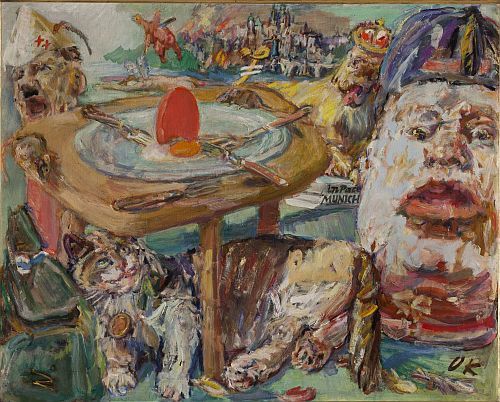 Oskar Kokoschka, the enfant terrible of the Vienna of Klimt and Freud, inspired an entire generation of artists. His portraits of people and animals are the subject of a major exhibition at Museum Boijmans Van Beuningen this autumn. More than a hundred and forty of his paintings and drawings of leading figures within the Austrian avant-garde are coming to Rotterdam.

Oskar Kokoschka (Vienna 1886 – Villeneuve 1980) was one of the most important artists of Vienna’s avant-garde at the beginning of the twentieth century. This autumn, more than 33 years after Kokoschka’s death, Museum Boijmans Van Beuningen is presenting a survey of the work of this master. In 1950 Museum Boijmans Van Beuningen was the first Dutch museum to buy a painting by Kokoschka. Although there have regularly been large exhibitions of his work in Austria, Germany and the United States, it is more than half a century since his work was seen in this country. About hundred and fifty paintings and drawings have been lent from private collections and museums around the world. His masterpieces ‘Mandrill’ (1926) and the ‘Double Portrait of Hans Mardersteig and Carl Georg Heise’ (1919) from the museum’s own collection form the starting point for this exhibition, which has been in preparation since 2010.

The combination of portraits of people and animals takes its inspiration from the exhibition ‘Bildnisse von Oskar Kokoschka – Menschen und Tiere’ at Kunstsalon Paul Cassirer in Berlin in 1927. Although people were the central subject matter in Kokoschka’s work and he said he wanted to paint ‘man’s aura in space’, he was also fascinated by animals and loved to paint them. Kokoschka’s portraits of people show how he viewed man and his role in society. His paintings offer a personal perspective on the great events in the period around the turn of the century and Europe’s dislocation by two world wars.