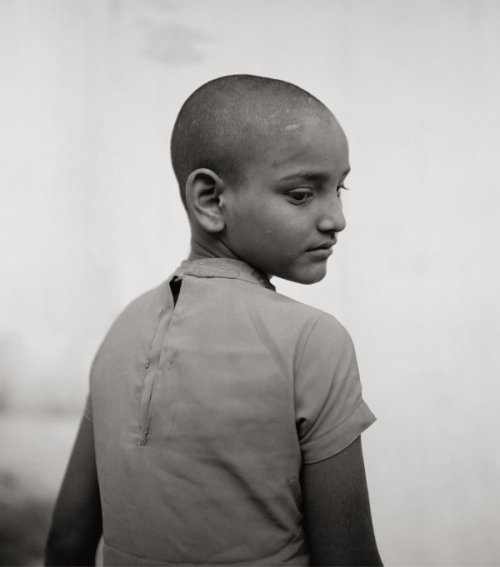 [ad#lb]
Approximately 70 works by the artist-activist Fazal Sheikh will be on view June 27-September 13 when Beloved Daughters: Photographs by Fazal Sheikh comes to the Nelson-Atkins Museum of Art. The exhibition of black-and-white photographs, organized by Princeton University Art Museum and presented at The Nelson-Atkins Museum of Art in a condensed version, unites two projects, Moksha and Ladli, which examine the lives of women in certain sectors of Indian society.

Moksha concerns dispossessed widows in the holy city of Vrindavan, who live out their lives in devotion to Krishna, while Ladli examines the perilous effects of enduring prejudices against girls and young women in a changing, modern India. Pairing beautiful portraits with powerful personal testimonies, Sheikh brings viewers eye-to-eye with subjects who might otherwise remain anonymous.

Fazal Sheikh was born in New York in 1965 and graduated from Princeton University in 1987. Since the early 1990s, Sheikh has created sustained portraits of communities around the world, addressing their beliefs and traditions as well as their political and economic problems. In 2005, Sheikh was awarded a MacArthur Foundation “genius” grant and the Henri Cartier-Bresson Foundation International Award.

April M. Watson, Associate Curator of Photography at the Nelson-Atkins and the venue curator, sees Sheikh’s use of photography as continuing a long tradition within the medium’s history: that of the concerned photographer. “Sheikh’s commitment to using photography as a tool for social reform has a distinct lineage,” Watson said. “In our own country, Lewis Hine, whose early 20th century photographs of Ellis Island immigrants and child laborers fused factual documentation and empathetic engagement, is a direct precedent. Dorothea Lange’s work for the Farm Security

Administration in the 1930s, and W. Eugene Smith’s photo essays for Life magazine in the 1950s, is also part of this distinguished history.”

As a historical reference, a small selection of social documentary photographs from the museum’s collection will be on view in the adjacent gallery for most of the Beloved Daughters exhibition. Also on view will be a selection of photographs highlighting other aspects of India’s rich and vital culture, by Henri Cartier-Bresson, Linda Connor and others.

“Many of us experience the numbing effects of a typical newscast, which often relies heavily on shock and awe to report the world’s social problems,” Watson said. “But Sheikh is a listener rather than a voyeur, working within communities for extended periods to gain a better understanding of their situations. His photographs reflect this considered, thoughtful approach, helping to bring viewers within his subjects’ moral reach. Such an accomplishment is truly rare in our media-saturated, sound-bite age.”

Beloved Daughters: Photographs by Fazal Sheikh and associated publications have been made possible by Jane W. Watkins. The exhibition was organized by the Princeton University Art Museum.

In Kansas City, this exhibition is supported by the Hall Family Foundation. Midwest Airlines is the official airline sponsor.

Painting the People: Images of American Life from the Maimon Collection One World