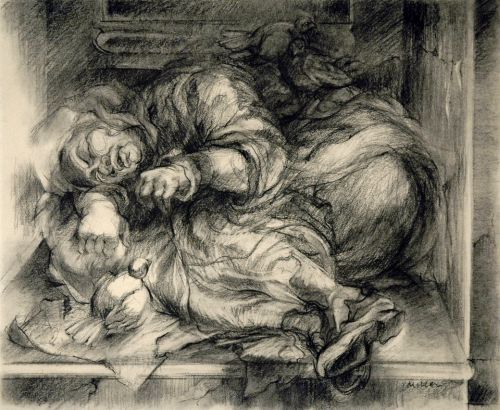 I Look, I Listen: Works on Paper by Marlene Miller is on view in the Pfundt Gallery, James A. Michener Art Museum, July 14 through October 14, 2012. This exhibit is sponsored by Mary Lou and Andrew Abruzzese, The Pineville Tavern.

A master printmaker and draftsperson who is equally adept with ink, pencil, charcoal, and most other two-dimensional techniques, Miller believes art is not about making pretty pictures. Rather, she is moved by the paradox of a world that juxtaposes incredible beauty with the horrors wrought by human hands.

“Miller has devoted her creative life to using her formidable skills in service of seeing, understanding and expressing things that most of us turn away from,” says the Michener’s Marguerite and Gerry Lenfest Chief Curator Brian H. Peterson. “Profoundly disturbed by images from the civil rights movement in the 1960s, she made ink drawings of the hate-filled faces of Southern housewives.”

“I’m always observing the world around me and painting the image of the underdog,” says Miller. “I’m compelled to put before people things that attack their feelings and consciousness about social issues.” She confronts powerful issues such as the Holocaust, feminism, and homelessness, focusing on those who suffer: the elderly, and victims of AIDS, war, and racism.

While most people avoid looking at the crumpled bodies on subways, Miller stopped, observed, and made evocative and highly skilled drawings that beautifully captured the pathos and horror of the moment. Miller has visited asylums and nursing homes, and made powerful images of street people and residents of women’s shelters. And she has honored the memory and achievements of notable women in a series of large-scale woodblock prints.

“Marlene Miller is a warrior, but a warrior with a conscience, a warrior who has no interest in territory or power,” continues Peterson. “Her battlefields are wherever there are people who suffer, who need help, who are ignored and forgotten.”

Reflecting on her life as an artist, Miller says simply, “I look, I listen.”