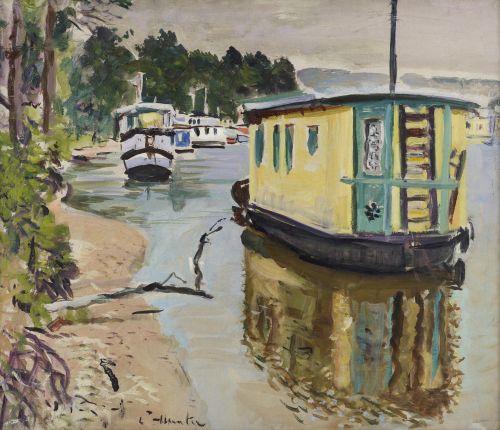 A major exhibition of works by the Scottish Colourist painter Leslie Hunter, covering his life in San Francisco, Scotland, France and Italy, will go on show at The Fleming Collection at 13 Berkeley Street, London W1 from 23 October 2012 to 9 February 2013. Over 70 pictures, two-thirds of which are from private collections, will be exhibited at The Fleming Collection, which has become an embassy for Scottish art in London, in the show entitled Leslie Hunter: A Life in Colour. The exhibition is sponsored by Lyon & Turnbull, Scotland’s oldest firm of auctioneers.

Hunter was a brilliant painter but more than 80 years after his death he remains misunderstood and is the least appreciated of the four Scottish Colourists, according to Bill Smith and Jill Marriner, who have written a new biography of Hunter. His fellow Colourist Samuel John Peploe said that Hunter’s best pictures were as good as Matisse yet his work could be uneven and his life was marred by tragedy and illhealth.

George Leslie Hunter was the youngest of five children of a chemist in Rothesay on the Isle of Bute. After the death of two of his siblings within a month, the family emigrated to California in 1892 in search of a healthier climate. When they returned to Scotland seven years later, Hunter decided to stay in the United States, moving to San Francisco and adopting the forename Leslie, by which he is known today. The bohemian mood of the period suited him well and in the years that followed he divided his life between California, Scotland and France. Initially sales were few and he had to rely on income from magazine illustrations to survive.

Hunter suffered a serious setback on the eve of his first solo exhibition when all his work was destroyed in the San Francisco earthquake and fire of 1906 which left him with nothing but the clothes that he was wearing. He returned to his family in Glasgow and, with financial support from his mother, was able to spend the next few summers in Paris, where he was shocked by the work of Picasso and Matisse. Initially influenced by the 17th century Dutch masters and the French painters Chardin and Manet, Hunter acquired a deep understanding of contemporary French painting, particularly the work of Cézanne and later Matisse, applying their principles relating to colour, form and harmony in his own work.

In an article in Scottish Art News, to be published by The Fleming Collection, Smith and Marriner write: “Hunter was an intelligent, sensitive, driven man, who lived for his art to the exclusion of almost everything else. On occasions in the 1920s this would have a detrimental effect on his physical and mental health.” It was a decade when Hunter exhibited for the first time with the other Scottish Colourists – Peploe, Cadell and Fergusson – but also when producing work for so many exhibitions exacted a huge toll on him. He suffered a mental breakdown and was later seriously ill after accidentally swallowing turpentine that he had stored in a wine bottle. But by the start of the 1930s his reputation was growing and he remarked: “I have been kicking at the door so long and at last it is beginning to open.” Tragically it was not to last. His health deteriorated and following an operation for a ruptured gall bladder he died in Glasgow on 7 December 1931 aged 54.

“Leslie Hunter is the least appreciated of the four painters….known today as the Scottish Colourists,” write Smith and Marriner. “In the past his vision for art and his painting have been frequently misunderstood by those who considered themselves well-versed in such matters, including many of his fellow artists…..To an extent there is still a misunderstanding of the man and his work today. Yet Hunter at the top of his form has few equals in Scottish, if not British, painting. It was Peploe himself who said of a work by Hunter…… ‘That is Hunter at his best, and it is as fine as any Matisse’.”