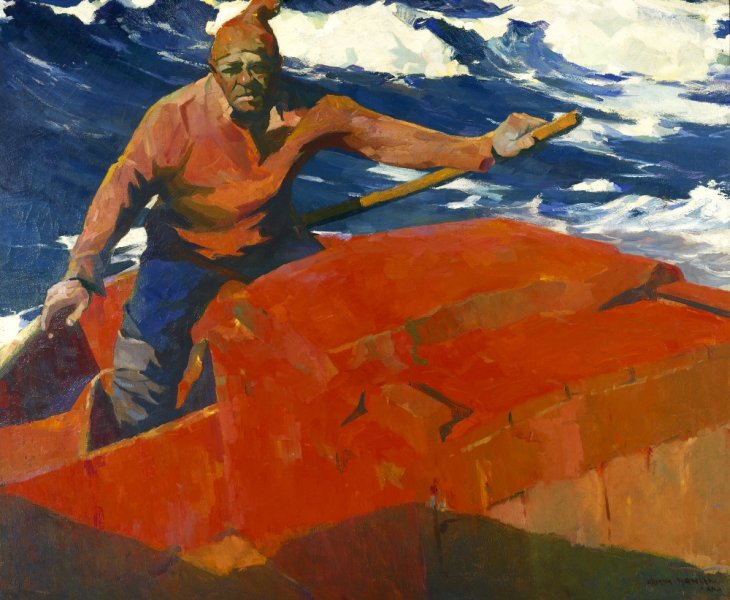 [ad#lb]
It began in 1959 when a group of art enthusiasts formed a local chapter of the American Federation of the Arts: Now, the Monterey Museum of Art prepares to celebrate fifty years of collecting, preserving, educating about and exhibiting art by presenting a celebratory pair of thematic exhibitions in its two locations. While the curators, registrar, art handlers and conservators work with gems of the Museum collection which have rarely been seen as well as some familiar and beloved artworks, the Pacific Street galleries will be closed to enable such extensive work to be done within the small facility. Meanwhile, the public will be provided unusual access to the curatorial and conservation process through a series of Saturday programs.

At MMA La Mirada, the anniversary gifts: Fifty/50 opens March 14. The exhibition features fifty significant works of art that have been given or are promised to the Museum in celebration of its anniversary. Fifty/50 opens at MMA La Mirada on March 14. “The generosity of this community is really heartening,” says Executive Director E. Michael Whittington. “The addition of these works contributed by members of our community profoundly deepens our collection.”

On April 18, the Pacific Street galleries reopen grandly to Made in Monterey, an exhibition of the most beloved and important works in the permanent collection of the Museum. ”We have an extraordinary opportunity in this, our 50th year, to look deeply at the artistic heritage of our community,” says Whittington. “We have remarkable treasures, including paintings created on the Monterey Peninsula since the arrival of the first artists in the late nineteenth century and photographs by the seminal contemporary photographers who worked and lived here such as Ansel Adams, Edward Weston and the others that gravitated to this community of innovators.”

Two beloved works by Armin Hansen, Nino and Men of the Sea are being conserved in preparation for their new debut. Historic murals by Armin Hansen and Carolyn Mytinger which have been preserved in storage will be unrolled, their condition assessed and their potential for display reviewed. The Hansen murals were painted for the bar at the Hotel Del Monte which was dismantled when the Naval Postgraduate School opened. The murals will be the subject of one of the Saturday programs:

Rediscovered Murals by Armin Hansen and Carolyn Mytinger, is a discussion led by E. Michael Whittington along with a rare view of the unrolled murals and their conservation process, presented on Saturday, January 31 from 2-4 pm.

Behind the Scenes of Made in Monterey offers insights about the making of the exhibition, presented by Executive Director E. Michael Whittington and Chief Curator Marcelle Polednik, Saturday, March 28, 2-4 pm

All programs are presented at MMA Pacific Street. Admission is free.