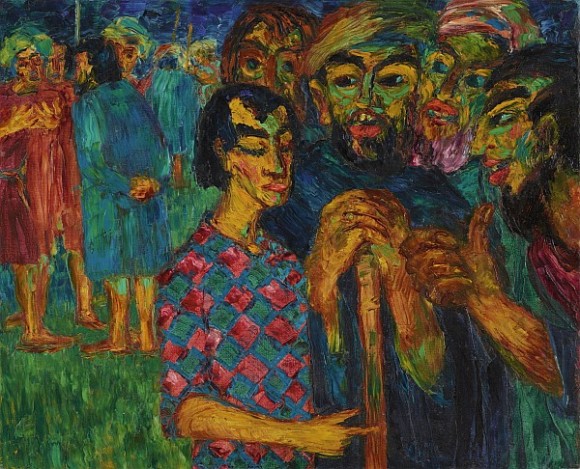 “This is why I tended to avoid all previous contemplation, a vague idea of radiance and colour was enough for me […],” Emil Nolde wrote in 1936 about his instinctive approach and the uninhibited handling of colour that characterize his works. Featuring Emil Nolde – In Radiance and Colour, the Belvedere, in cooperation with the Ada andEmil Nolde Foundation Seebüll, devotes an exhibition to the outstanding maverick of German Expressionism that conveys a lively impression of his colour explosions. The show presents works from all of his creative periods, ranging from his early garden paintings informed by Impressionism, biblical subjects, and illustrations of legends to pastels painted in the South Seas, the Unpainted Pictures, which he conceived while he was forbidden to paint, and his famous late flower compositions. These works are complemented by a number of the artist’s prints, as well as selected works by such Austrian painters as Oskar Kokoschka and Herbert Boeckl, who drew their inspirations from Nolde’s art. Around 1911/12, Nolde started developing his personal style. By way of the colourful Impressionism of his garden paintings made around 1907 and his religious subjects painted in 1910, exhibiting a new brilliance of colour and streaky brushwork, the artist arrived at a manner of painting that emphasized glowing, saturated colour fields and omitted detail. The large diversity of subject matter in his unmistakeable oeuvre includes grotesque fantastic creatures, ecstatic dancers, and scenes from Berlin nightlife, but also biblical subjects and Christian legends, as well as the landscape of his native Nordschleswig and atmospheric seascapes of the North and Baltic Seas. Nolde’s affinity with nature and his constant search for primitive authenticity prompted him to travel as far as New Guinea, where he hoped for inspiration removed from Western civilization.

Nolde’s direct approach to painting and his unique treatment of colour culminated in the immense Unpainted Pictures, painted in secreted because of the ban on painting imposed on him on 23 August 1941. Expelled from the Reichskunstkammer, he was forbidden from doing anything connected with the visual arts. This was a great shock for the painter, who like many other artists had originally welcomed the Nazi rise to power, hoping after the trauma of the First World War and the Treaty of Versailles that it would give Germany direction and restore its belief in itself. Between 1938 and 1945 he painted over 1,300 small watercolours and gouaches with invented, mostly fantastic imagery, in his studio in Seebüll, of which almost 50 are being shown in the Lower Belvedere. In doing so, he created faces, figures and fantastic half-man, half-animal creatures from accidental splashes of paint. He also painted landscapes from memory, including blood-red seas or rocky shores dipped in lapis lazuli. Emil Nolde – In Radiance and Colour shows major works from the collection of Stiftung Seebüll Ada und Emil Nolde, the Kunsthalle in Hamburg and other museums and private collections. They include landscapes, seascapes, portraits, Berlin scenes, religious pictures and fantasies, and high-quality series of watercolours and almost 50 sheets of Unpainted Pictures. The exhibition also features selected works by Austrian artists like Werner Berg, Herbert Boeckl, Oskar Kokoschka and Max Weiler, who took inspiration from Nolde’s colour explosions. In this way the exhibition also reflects the intensive interaction between artists in the 20th century Europe.