Elizabeth Heyert, The Idol Exhibition at the Palazzo Mora during the Venice Biennale 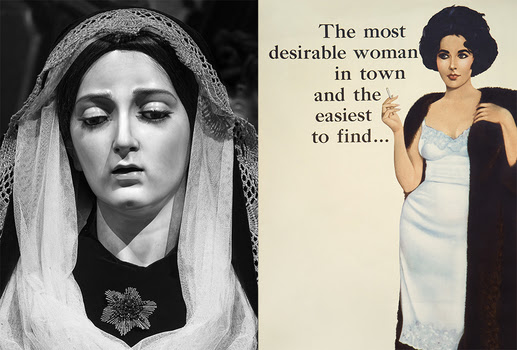 New York-based photographer Elizabeth Heyert will premiere seven works from her new series, The Idol, at the Venice Biennale in May 2019. Selected as part of Personal Structures, a group exhibition curated by Global Art Affairs Foundation (GAA), a Dutch non-profit organization, and hosted by the European Cultural Centre (ECC), Heyert’s work will be shown at the historic Palazzo Mora.

The Idol is inspired by the problem of the representation of women, centered on the question: What makes a woman an idol, an object of fascination and worship? Heyert pairs visual artifacts from classic Hollywood with photographs of historical statues of the Virgin Mary. Mary was the starting point for this project, with her image perhaps the most ubiquitous in the western world. Traveling to cathedrals and churches throughout Southern Spain, such as the Cathedral of Malaga, the Cathedral of Marbella, and smaller churches in Seville, Granada, and surrounding towns, Heyert concentrated on capturing the exquisitely realistically-rendered faces, most dating from the seventeenth century. She discovered a remarkable similarity to recognizable mid-twentieth-century film stars, prompting the realization that the male fantasy of the archetypal woman seems to have remained unchanged over the course of many centuries.

By juxtaposing images of Mary with those of Hollywood stars, Heyert interrogates the Madonna-Whore dichotomy. Permeating both art history and, more broadly, visual culture as a whole, this dichotomy divides women into two opposite categories: the pure and virtuous and the depraved, sexualized and wicked. Heyert seeks to disrupt the impossible standard of the ideal embodied by Mary by stripping her of religious signifiers – her elaborate crown, rosary beads, the baby Jesus often seen in her arms – seeking to show her simply as a woman, rather than a religious icon.

The myth of the “bad” woman is captured in four film posters, showing Joan Bennett in The Woman on the Beach (1947), Diana Dors in The Unholy Wife (1957), Rita Hayworth in The Lady from Shanghai (1947), Elizabeth Taylor in Butterfield 8 (1960). The taglines scream of the danger of seductive, wicked women, with warnings like “I’m No Good” and “you know nothing about wickedness.” Additionally, the image of Marilyn Monroe in the 1962 LA Times announcement of her death, emphasizes how we can elevate the women we worship only to destroy them, and then love them even more once we no longer have them.

Heyert also created a diptych of a color photograph of Mary alongside a text in the style of a formal manuscript. On close inspection, this is revealed to be a list of hundreds of offensive words used to denigrate women, a provocative and timely reminder of the ways that women are often viewed and also treated in everyday life.