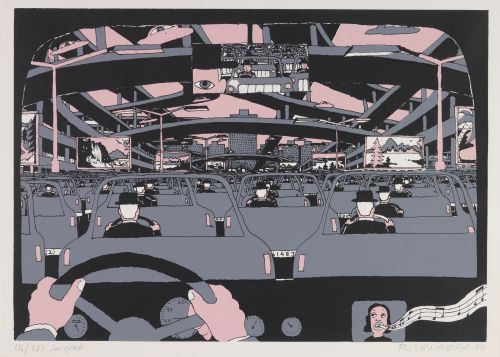 In the spring of 2013, Museum Boijmans Van Beuningen will be exhibiting the multifaceted work of the well-known Norwegian artist Pushwagner (Oslo, 1940). Celebrated in his home country as the ‘contemporary Munch‘, this touring exhibition is his very first solo exhibition outside Norway. The exhibition includes illustrations, photo collages, animations, paintings, prints and drawings from the past forty years, particularly from the years up to 1989. Three series from the work of Pushwagner will be at the heart of the exhibition in Museum Boijmans Van Beuningen: ‘Soft City’, ‘Family of Man’ and ‘Apocalypse Frieze’.

‘Pushwagner: Soft City’ was previously shown in MK Gallery, United Kingdom and Haugar Vestfold Art Museum in Norway. The exhibition received rave reviews in The Guardian and Icon Magazine.
The curators are Anthony Spira of MK Gallery and freelance curator Natalie O’Donnell. A richly illustrated monograph accompanies this exhibition; it is on sale at the museum shop. This exhibition is a nice companion to the collection of contemporary drawing of Museum Boijmans Van Beuningen with surrealistic overtones exhibited last year in the Institut Néerlandais in Paris and in Rotterdam.

Large and detailed drawings
The graphic novel ‘Soft City’ (1969-1976), considered by many to be Pushwagner’s most important work, consists of 154 pages in which the daily life of a modern city develops in highly detailed pen drawings. ‘Family of Man’ is a series of 34 screen prints from the ‘eighties, in which extravagant repetition and infinity are illustrated in the almost identical drawings in pink, black and grey. The third series, ‘Apocalypse Frieze’ (1986-1993) contains seven large-scale works. One of these very large works, entitled ‘Jobkill’, is considered one of the world’s most extensive and detailed art works. Workers are portrayed in minute detail. They are wild figures who seem to be on the way to their own destruction.

Satirical criticism
In his work, Pushwagner is inspired by the post-war American consumer culture, the glamour of Pop Art and science fiction, and also by Beat poets such as William Burrough and his novel ‘Soft Machine’ dating from 1961. The comparison with Edvard Munch arises from the existential view they share of the world. In his work, Pushwagner makes multifaceted satirical commentary on the power and greed in twentieth century society. For more than four decades, his illustrations of an inhuman metropolis, under constant threat from contamination, totalitarianism and mass destruction, give a far-reaching view of a world that is becoming increasingly like our own.

Hariton Pushwagner
Hariton Pushwagner (pseudonym of Terje Brofos) is often described as an eccentric, provocative and visionary figure. He is a cult figure in Norwegian society. Articles are regularly published about him and he frequently appears in talk shows. He trained at the High School for the Arts in Oslo and at the Cité Internationale des Arts Paris. His international breakthrough was in 2008 when he participated in the Biennal of Berlin.
The exhibition has partly been made possible thanks to Fritt Ord (Foundation for Freedom of Expression, Norway), Norsk Kulturråd (Norwegian Council for Culture) and OCA (Office for Contemporary Art Norway).