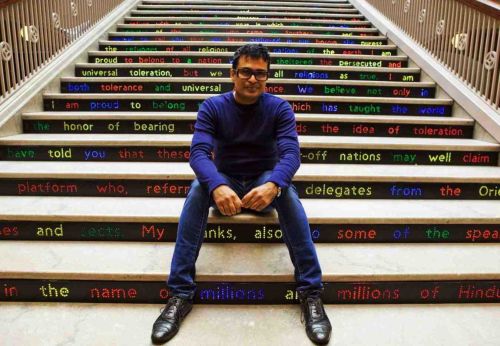 This fall, acclaimed contemporary artist Jitish Kallat turns the landmark Art Institute Grand Staircase into a meditation on religious tolerance, drawing on the museum’s own history in concert with the most devastating terrorist attack on American soil. Public Notice 3 , a site-specific installation, brings together two key historical moments: the first Parliament of the World’s Religions, opening on September 11, 1893, in what is now the museum’s Fullerton Hall, and the terrorist attacks on the World Trade Center and the Pentagon 108 years later, on that very date. Public Notice 3–the first major presentation of Kallat’s work in an American museum–will be on view September 11, 2010 through January 2, 2011.

The Art Institute of Chicago has long held a unique historical connection with India. In 1893, during the World’s Columbian Exposition, the museum’s building served as the site of one of the most important gatherings in the history of modern religion, the first World’s Parliament of Religions. One of the opening speakers was a young Hindu monk from India, Swami Vivekananda, who stunned and enthralled the audience of 7,000 with an address that opened one of the first dialogues between Eastern and Western traditions and, importantly, argued passionately for universalism and religious tolerance. Exactly 108 years before the attacks in New York City and Washington, DC, Swami Vivekananda called for an end to all “bigotry and fanaticism” and pleaded for brotherhood across all faiths, a speech that was met with a standing ovation and was heralded by journalists as one of the pivotal moments of the Exposition. (Even today, the stretch of Michigan Avenue in front of the Art Institute is the honorary “Swami Vivekananda Way.”)

Kallat has chosen this historical event as the basis and site for his monumental installation. For Public Notice 3 , Kallat will convert the complete text of Vivekananda’s inspiring speech into LED displays on each of the 118 risers of the museum’s Woman’s Board Grand Staircase, which is itself adjacent to what is now Fullerton Hall, where Vivekananda made his original presentation. Drawing attention to the great chasm between this plea for tolerance of 1893 and the very different events of September 11, 2001, the text of the speech will be displayed in the five colors of the United States’ Department of Homeland Security alert system–red, orange, yellow, blue, and green.

This historical coincidence–and the fact that the speech was delivered at the earliest attempt to create a global dialogue of faiths–heightens the potency of Vivekananda’s persuasive words. The resulting work, Public Notice 3, creates a trenchant commentary on the evolution, or devolution, of religious tolerance across the 20th and 21st centuries. The installation will serve not as a passive commemorative act but rather as an actively contemplative space.

Public Notice 3 draws on Kallat’s earlier works, Public Notice and Public Notice 2, which also converted historic texts into large-scale installations. In Public Notice (2003), Kallat converted the text of Jawaharlal Nehru’s speech on the eve of Indian independence on August 15, 1947, into mutable rubber cement letters, which were then melted, burned, and installed against a reflective surface, lending the speech itself a violent, refractory cast. For Public Notice 2 (2008), Kallat recreated Mahatma Gandhi’s 1930 speech before the historic march protesting the British salt tax–which essentially outlined a manifesto for Indian independence on the foundation of civil disobedience–into 4500 fiberglass letters that appear to be bones. Public Notice 2 was recently one of the centerpieces of the Saatchi gift of contemporary art to the British nation.