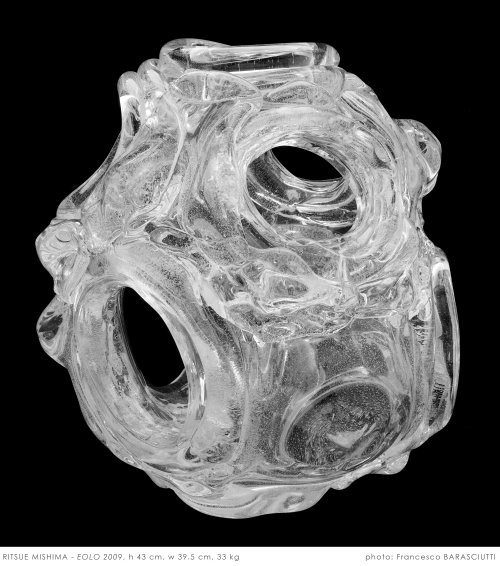 Ritsue Mishima, one of today’s leading glass designers, is filling a Japanese winter garden in Museum Boijmans Van Beuningen with glass objects. It will be a garden that plays with the inspiring Dutch light, captured differently each time by the Venetian glass.

This spring Museum Boijmans Van Beuningen presents an exhibition of some thirty glass objects by the Japanese glassmaker Ritsue Mishima (Kyoto 1962). Twenty new vases in harmony with the location are being made especially for the exhibition. A number of loans and items from the museum’s own collection will also be shown. Mishima’s vases will stand low to the ground in a specially constructed Japanese Zen garden in the museum. Visitors walking along the path among the objects will experience an emotional play of Dutch light.

Crystal clear
Mishima started out as an interior designer for architects and magazines. In 1996 her career took on an extra dimension when she began to make her own designs in a quest for the ultimate vase. She uses only crystal-clear glass for her pieces, bringing the glass to life with the assistance of a team of specialists. This takes a great deal of physical strength and effort. Every imaginable decoration technique, from appliqué, grinding and polishing to engraving, is brought into play to achieve a true Mishima.

Emotions
The energy put into the development of the objects is captured in the vases. Each Mishima vase is unique and has its own character, so that they always reflect the light differently. Mishima’s emotions are expressed through her works—at times as playful, flowing forms, at others as savagely powerful elements. Mishima draws inspiration for the shapes from the Venetian lagoon with its enchanting light and rich marine life. The universe with its heavenly bodies, stars and meteorites also plays an important role in the design of her works.

Mishima: ‘How can I explain my emotions? Thanks to the glassblowers, minerals and fire, everything is blended to make glass. It all comes together in a race against time and a shape develops from within. The incessant rhythm of material and action during the glassblowing can always fill me with excitement and passion.’

Ritsue Mishima lives and works in Tokyo and Venice, and her work is exhibited all over the world. She has had shows in Tokyo, Berlin, San Francisco and Milan. The objects will also be on display in the Venetian Pavilion at the 53rd Venice Biennale (2009). Mishima was awarded the Giorgio Armani Prize for best artist at the Sotheby’s Contemporary Decorative Arts Exhibition in London in 2001.