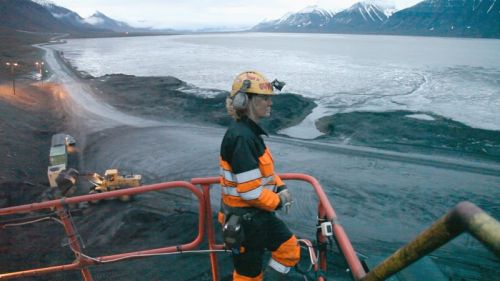 Janet Biggs is known mainly for her video, photography and performance works that revolve around an exploration of extremes, whether geographical or physical. In them, Biggs takes her subjects, and herself, to the very limits of what is possible. Four of the artist’s video pieces, produced between 2010 and 2012, will be screened at the MAC: Fade to White, 2010, Brightness All Around, 2011, and In the Cold Edge, 2010, which together form The Arctic Trilogy, and her latest video, A Step on the Sun, 2012. Each of these works portrays lone individuals in extremely harsh environments. We meet an arctic explorer, a coal miner, an ice spelunker and a sulphur miner. They are all simply performing their jobs, but the artist sees their labours as testimonies of existential quests, unfettered desires or dire economic necessity. Biggs describes the works as “prompting questions about power hierarchies, social structures and individual relationships to desire.”

The exhibition Janet Biggs is being presented at the MAC in connection with the Montréal / Brooklyn event, which will also showcase a video by French-born Montréal artist Aude Moreau. As part of this contemporary art event, the Musée is partnering with the Brooklyn gallery Smack Mellon. The Brooklyn segment of this cultural exchange consists of a site-specific installation by Aude Moreau and a new video work by Janet Biggs, scheduled to run at Smack Mellon from January 12 to February 23, 2013.

The Art of Cartier Pierre Dorion