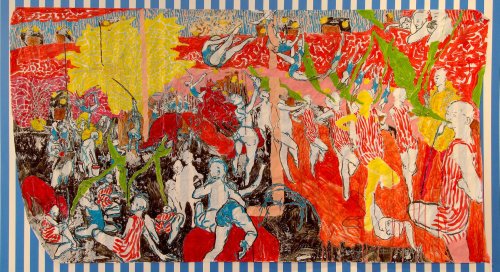 Giò Marconi gallery is very pleased to announce its first solo exhibition with the Russian artist Dasha Shishkin which will be held in the underground spaces of the gallery.
Shishkin, who has been living and working in New York since 1993, initiated her career with the widely known exhibition “The Compulsive Line: Etching 1900 to Now” show at the MoMA in 2006 in which she was to be seen among the likes of Marcel Dzama, Jake and Dinos Chapman, David Hockney, David Shrigley etc.
Shishkin’s works are very diverse in nature. Her techniques vary between drawing and painting; she alternately uses acrylics, pastels, inks and graphites and while she applies wild, colourful and almost expressionistic bold brush strokes to her paintings (which, in fact, she does not want to call paintings because in her opinion they ar e “colored-in drawings”) she is, on the other hand, so very fragile with the lines in her etchings or drawings.

On display at the gallery will be various works on canvas and paper and three etchings that Shishkin made exclusively for the show.
Her works are always figurative and her rather decorative style at first prevents the viewer from seeing that the subject matter is macabre, fantastical, melancholic and more often but not violent and on the verge of the perverse. Her works seem to stem from the realms of fairy tales – that is from the ones with the dark and unhappy endings….
One of the larger scale canvases that will be in the exhibition is divided into 2 parts. Both in the upper and the lower part of the canvas an interior scene is depicted: the scenes seem to take place in a Russian home (or at least this is what the costumes of the persons are suggesting), but instead of showing a peaceful Russian interieur the nostalgic remembrance is shattered by a tragic event: in the middle of the upper room, a slain, seemingly decapitated, bloody body lies on a blood red carpet. Gushes of blood are dripping through the ceiling into the room underneath. In the lower part a leather-clad military figure seems to be raising his pistol towards a standing red figure with open arms.
This work is typical for Shishkin: the first impression is that of a nostalgic and beautiful work but the second glance reveals the dark and underworldly, often lethal charme of Shishkin who confronts the viewer with a macabre scene.
Shishkin’s stories are not easy to decode. She is a big story teller who depicts scenes of sensory overload in which romance, eroticism, violence but also humor are captured but she leaves the viewer with the task of decoding her always enigmatic works.
Another tool that Shishkin likes to apply to further encrypt the messages of her works is the use of language (“Titles are like a cherry on a cake. The cherry does not make a cake a cherry cake, but it is still there to attract or distract an eye.”): in her titles she uses puns like “Fucking Children”, slightly changes the meaning of widely known truths like in “It takes Money to Feed Pretty Women” or plainly uses lines that have nothing to do with the actual work.
Shishkin’s works have often been related to Goya and Bruegel, Egon Schiele and Hieronymus Bosch and they do, in fact, have a rather old-wordly and turn-of-the-last-century feel to them. But Shishkin’s pieces belong in a category of their own…

Songbirds and Elephants for Sale: Two Works from the Collection Re: Contemplating the Void—Create Your Own Guggenheim Intervention