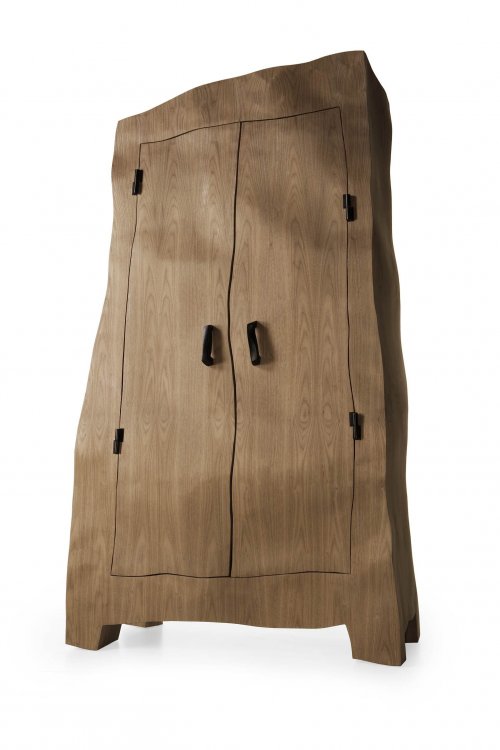 [ad#lb]
This summer the V&A will explore the recent trend among European designers for limited edition pieces that push the boundaries between art and design.
Telling Tales: Fantasy and Fear in Contemporary Design will bring together around 50 objects that share common themes such as fantasy, parody and a concern with mortality. The exhibition will feature furniture, ceramics, lighting and large scale installations by designers including Tord Boontje, Maarten Baas, Jurgen Bey and Studio Job.

Gareth Williams, the curator, has arranged the exhibition in three sections. The first, ‘The Forest Glade’, will display objects inspired by fantasy and nature that evoke the spirit of fairytales such as Tord Boontje’s Fig Leaf wardrobe, constructed from 616 individual, hand-painted copper leaves. His Petit Jardin armchair, cut from sheet steel and assembled by hand, is designed to create the sensation of sitting in an overgrown
garden.

Work by designers Fredrikson Stallard, Julia Lohman, Maarten Baas and Tomáš Gabzdil Libertiny will be in this section. Libertiny produces his intricate Made by Bees vase by placing a wire frame in a beehive and allowing bees to create its honeycomb walls.

The second section, ‘The Enchanted Castle’, will look at work that exaggerates and parodies historical design styles often associated with displays of status. Studio Job’s Robber Baron series of gilded and cast bronze furniture subverts the extravagance of late-Victorian design, and the perceived taste of today’s super-rich. A large cabinet, based on an original from the workshop of André-Charles Boulle of about 1700, has a huge hole blasted through its centre. Other works in the group include a clock, table, lamp and jewel safe covered in motifs of weapons, polluted clouds and factories representing war, power and industry.

On show will be two recent V&A acquisitions. Maarten Baas’s Smoke Mirror is part of his Smoke Furniture series created by burning reproductions of antique furniture with a blowtorch to produce a charred effect. Lathe Chair VIII by Sebastian Brajkovic is an exaggerated love seat seemingly made from a single 19th-century chair stretched into two.

The final section, ‘Heaven and Hell’ will display work by designers concerned with themes of mortality and the afterlife. The Lovers rug by Fredrikson Stallard comprises a pair of conjoined pools of poured red urethane representing the average quantity of blood in two people.

Some of the designers in this section reference historical depictions of ‘The Last Judgement’ or Dante’s ‘Inferno’. An example is Luc Merx’s The Fall of the Damned chandelier made up of a cloud of around 170 weightless and tumbling human figures suspended in mid air. Others reflect an interest in psychoanalysis, such as Joep van Lieshout’s Sensory Deprivation Skull, a large skull-shaped, fur-lined chamber to accommodate two people. These objects will appear together with work by Dunne & Raby, Niels van Eijk and Miriam van der Lubbe and Boym Partners.

Gareth Williams said: “This exhibition aims to capture a way of designing that has been emerging in recent years. These objects have stories to tell and we wanted to present some of the most creative and innovative examples and explore common themes.”

The exhibition designers are Nissen Adams who, together with lighting designer Zerlina Hughes, will create a dramatic setting for each section. In ‘The Forest Glade’ a background of printed gauze screens and dappled lighting will evoke the forests of myths and fairytales. A distorted palatial atmosphere will be the setting for ‘The Enchanted Castle’. Spot lit objects and diagonal walls will create a disconcerting ‘Heaven and Hell’.