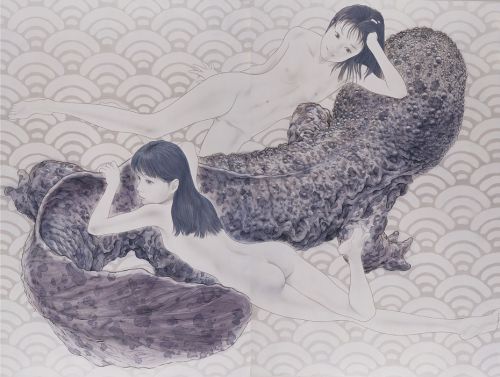 For more than 20 years since his debut in the early 1990s, Aida Makoto has brought a critical perspective to such subjects as Japan, the United States, history, tradition, manga, war, salarymen, pretty young girls, art, and education system, touching upon contradictions in Japanese society, politics and economics during the period of modernization in the Meiji and subsequent periods followed by the rapid economic growth after the Second World War, as well as mass culture and the system surrounding visual art practice that emerged in the wake of these changes. In the course of his practice, Aida has often overturned the accepted wisdom, attitudes and customs that have been collectively and unconsciously shared by Japanese society, and graphically laid bare its taboos, complexities, real intentions and contradictions. For this reason, Aida has trodden a path all of his own, producing artwork that induces in viewers intense feelings of both discomfort and exhilaration.

Compared to other artists of his generation, critical response to Aida’s artworks has been consistently favorable. He also continues to garner high levels of respect from the generation of artists below him. And yet he has never held a large-scale solo exhibition at a museum. In this show, we will present the entirety of his creative output. Through his artworks, Aida identifies and then places before us all manner of peculiarities within contemporary Japanese society – social taboos, emasculated traditions and the coexistence of art and mass culture. To confront such issues through Aida’s practice is one of the things needed most as we think about the future of this nation today.