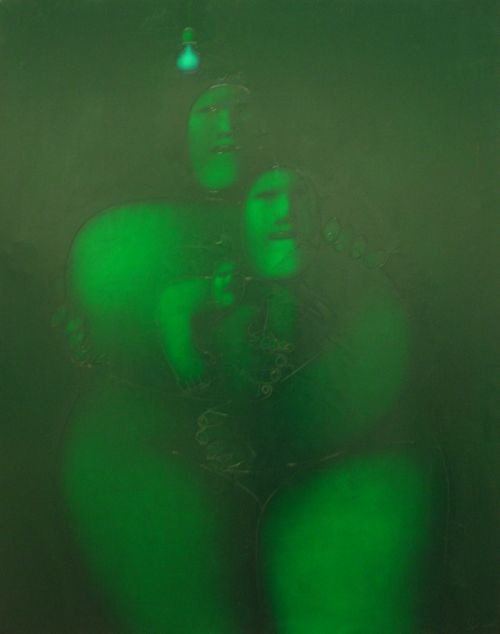 Conversation about paintings and sculptures is the foundation to comprehending art. Artworks are discussed by viewers, critics and art historians. Artworks are commented by artists, who quote paintings and sculptures of their predecessors in their own pieces of art. From the moment of its creation, every artwork includes a set of commentaries. Thoughtful watching and talking about art mean articulating opinions and ideas conveyed in the artworks. The process is endless, and, moreover, the start and the end of it are imperceptible, as the first commentaries are hardly to be restored, and the last ones will be expressed in the distant future. To comment art is the main practice to understand it.

Twenty-five topics of the exhibition deal with diverse, sometimes incompatible ways of interpretation and commenting. Each theme demonstrates not only a new logic of communication with art, but also a new form of emotional experience. It reveals the potential of the commentary in a different way. It helps the visitor to occupy the main place in the exhibition by right; he or she becomes the key element in the series of endless commenting. Moving on through the halls, the visitor experiences the whole chain of intellectual, psychological and emotional conditions. He is to notice the semantic links between the hall’s architecture and the theme of the exhibition, played up in the unique museum space, and to become aware of the diversity of philosophical ideas and aesthetic strategies, saturating main art tendencies of the past century.

The title of the new selection from the collection of Moscow Museum of Modern Art «ARTisARTisART» refers to the «Two Hours in an Empty Tank» poem by Joseph Brodsky (1965). The tautologically sophisticated line, a repercussion of the self-reflection so characteristic of art, has become a starting point for the main idea of the new display. The idea is to understand art as an honest and many-sided open commentary. Two hours, mentioned by Brodsky, are an approximate period of time, which a viewer usually spends in the museum. MMoMA invites him to find himself in the area of crisscross references and mutually enriching dialogues between authors, artworks, the architecture of the museum’s halls and the viewer himself.

As a matter of fact, the commentary represents a universal continuity of generations. It is a prevailing element in art history and, at the same time, a stimulus for the development of new art processes. The exhibition is planned as a fascinating trip around the world of ideas of the 20th and 21st centuries, which are rendered by different visual arts. While creating their art, artists tried to represent and to transform different forms of cognition. A genuine artwork includes an impulse; its force makes the viewers discuss, comment, reflect upon the concept of the artwork and ideally calls upon for a constructive worldview, spreading these higher ideas. Thus, art reflects life as well as essentially influences upon it.

The new display follows the international museum practice of representing the museum’s collection in the form of annual changing exhibitions. MMoMA owns one of Russia’s most important collections of the 20th- and 21st-century art. Its holdings are regularly replenished with new artworks. The concept of each exhibition is elaborated by the museum’s team alone or together with an invited curator. It helps to show the collection from a new viewpoint, analyzing those or other artworks and art tendencies. The curator of the current selection is Dimitry Ozerkov, PhD, a well-known St. Petersburg-based art historian.