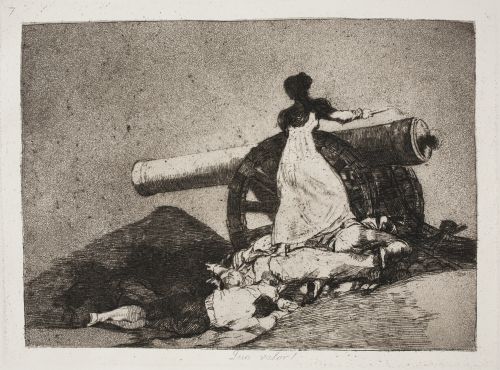 The best-known graphic work of Spanish artist Francisco Goya (1746–1828) is Los Desastres de la Guerra, known in English as The Disasters of War. Its message remains just as relevant today. Goya’s etchings depict for the first time war from the viewpoint of the civilian population’s suffering, without any attempt to soften the impact. We are ruthlessly presented with the brutality of war and the inhumanity of mankind. The etchings are an intense visual report of a barbaric behaviour that has since been repeated and is still continuing around the world today.

Goya began working for the Spanish royal court painting cartoons* for tapestries, before gradually becoming the official court painter. Concurrently with his career as a portrait painter, he did a number of commissions for the Catholic Church in Spain. After suffering a severe illness that confined him to his bed and left him deaf, Goya changed his work method in about 1793. He continued to do commissions but also began working on his own choice of subject matter. In these latter works he expressed his own thoughts and ideas, and his style became freer and more expressive. In 1824 he moved to France for political reasons and died four years later at the age of 82.

These more personal works by Goya include the graphic series The Disasters of War, which consists of 80 [82] etchings. Produced between 1810 and 1820, the series contains gruesome illustrations of the Spanish struggle for independence. The French army had invaded Spain in 1808 and Napoleon had placed his brother on the Spanish throne. This led to an uprising in Madrid and sparked off Spain’s war of liberation (part of the Peninsular War), during which guerrilla-like methods were used up until 1814.

The Disasters of War was first published in 1863, 35 years after Goya’s death. This delay was probably because Goya himself did not dare to publish such images – which would have been political dynamite at that time – for fear of the consequences. The pictures can be divided into three main topics: events from the war (nos. 1–47), the famine in Madrid during Napoleon’s siege of the city (nos. 48–64), and critical comments on the political situation in Spain (nos. 65–80).

The wartime events are depicted with a powerful realism and a mercilessness that are hard to protect oneself against. The impact is reinforced by the short comments engraved beside the pictures, such as “It’s impossible to look at this” or “This is too much!” It is thought that these comments are based directly on Goya’s own notes. He presumably witnessed many of the horrendous scenes that he depicts or heard about them from friends and acquaintances.

The famine in Madrid from 1811 to 1812, which in Spanish is usually called “Año del Hambre”, the year of hunger, took more than 20,000 human lives. Madrid’s civilian population suffered terribly during Napoleon’s long siege of the city. Goya’s strongly drawn moments in time give hunger a face. Their focal point is always on the individual rather than on the historical course of events. Weencounter emaciated people, both alive and dead.

The last etchings in the series focus on the situation in Spain immediately after the war, and are a devastating criticism of the subsequent power struggle between the country’s new rulers and the Church. In his satire, Goya uses various allegorical scenes and addresses topics such as the Inquisition and the use of torture.

The black-and-white graphic style suited Goya and he was a master at building up an image by using sharp contour lines combined with the chiaroscuro technique used in painting. He is said to have stated: “in art no colour is needed, I just see light and shadow.” Goya always based his copper plates on drawings, and a number of the original drawings for The Disasters of War are extant. Often, as in The Disasters of War, he combined various graphic techniques such as line etching, aquatint and engraving.

Over the years many artists have been influenced and inspired by The Disasters of War. One of them is Gerhard Nordström, whose works can be experienced at the same time at Malmö Konsthall in a major retrospective.

The exhibition is a collaboration with Norrköping Art Museum, Sweden.