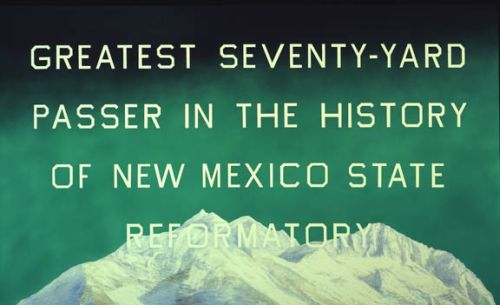 The Denver Art Museum (DAM) presents Ed Ruscha: On The Road, a vibrant exhibition featuring works inspired by Jack Kerouac’s seminal work On The Road, the novel that came to define the Beat Generation. Both artists utilize language as a form of social commentary, documenting the continuing shifts in the American cultural landscape. Ed Ruscha: On The Road will be on view from December 24, 2011 through April 22, 2012.
By superimposing passages from Kerouac’s epic 1957 novel onto images of snow-capped mountains or abstract backgrounds, Ruscha injects new life into the feverishly written words. Much of the novel, typed on a continuous 120-foot-long scroll, is set against the backdrop of post-World War II lower downtown Denver.
“On The Road is a quintessential Western sojourn,” said Thomas Smith, director of the Petrie Institute of Western American Art at the DAM. “As Denver played a significant role in On The Road, it’s fitting that the Denver Art Museum exhibits these corollary works.”
In 2009 Ruscha created his own limited edition artist book version of On The Road illustrated with photographs he took, commissioned or found that was published by Gagosian Gallery and Steidl. For this exhibition, Ruscha has created a new body of paintings and drawings pulled from the passages of Kerouac’s novel. The works are accompanied by Ruscha’s artist book edition of Kerouac’s novel. Each work takes its text from On The Road, painted over images of nature in Ruscha’s signature ALL CAP typography or drawn on delicately spattered abstract backgrounds.
Ed Ruscha: On The Road is organized by the Hammer Museum, Los Angeles.