Amsterdam’s canal belt. The expansion of Amsterdam in the Golden Age.

On the canals of Amsterdam
Rijksmuseum
1 June – 6 September, 2010 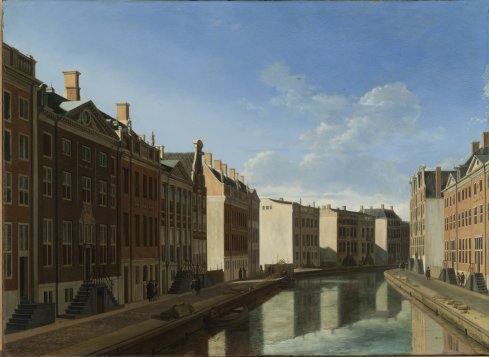 From 1 June, the Rijksmuseum will be hosting an exhibition of paintings, prints and drawings showing the spectacular expansion of 17th-century Amsterdam. A number of maps from the Rijksmuseum’s own collection charting the expansion agreed on in 1662 will also be on display. Central to the exhibition are six views by Gerrit Berckheyde depicting the Gouden Bocht (Golden Bend) on the Herengracht Canal which was the richest part of the new city.

The four paintings and two drawings by Berckheyde are from the collections of the Rijksmuseum, Amsterdam City Archives and the Six family and they provide a magnificent picture of one of the most beautiful parts of Amsterdam’s canal belt. Berckheyde captured the bend three times from the perspective of Leidsestraat and three times from Vijzelstraat. Some of the plots had not yet been built on circa 1672, which created a number of gaps where the sun shone through Amsterdam’s cityscape. The painter paid particular attention to the houses and left out details which disrupted the image he wished to depict. For example, on one drawing he only drew trees on the northern bank with lanterns – a very recent invention at the time – on the other side, thereby adding to the impression of a canal-side residential area of real standing.

The plots on the Herengracht between Vijzelstraat and Leidsestraat were especially deep and it was also possible to build properties that were twice as wide as a normal property by buying two adjacent plots. All building plots were released for construction from 1663 onwards and by around 1685 properties had been constructed on every plot. This became the most chic part of Amsterdam, hence the name the ‘Golden Bend’.

The exhibition will be called Amsterdam’s canal belt. The expansion of Amsterdam in the Golden Age and will present a number of exquisite maps of the canal belt, including by Daniel Stalpaert from 1662. Printed on six loose sheets, these maps offer a broad overview of the city’s expansion.

Amsterdam had long been a city like any other, but trade at the end of the 16th century was growing in a spectacular fashion and more and more people wanted to live in the city. By around 1672 Amsterdam had a population of more than 200,000. There was also constant demand for space to accommodate the docks and countless warehouses. The city had already expanded for a few years starting in 1585, but between 1610 and 1620 Amsterdam doubled in size. The final city expansion programme was decided on in 1662, when the three existing canals were extended. This gave Amsterdam’s canal belt the famous half-moon shape it has today, when the area has been nominated for a place on the UNESCO World Heritage List.

The presentation was made possible by the law firm Hogan Lovells.