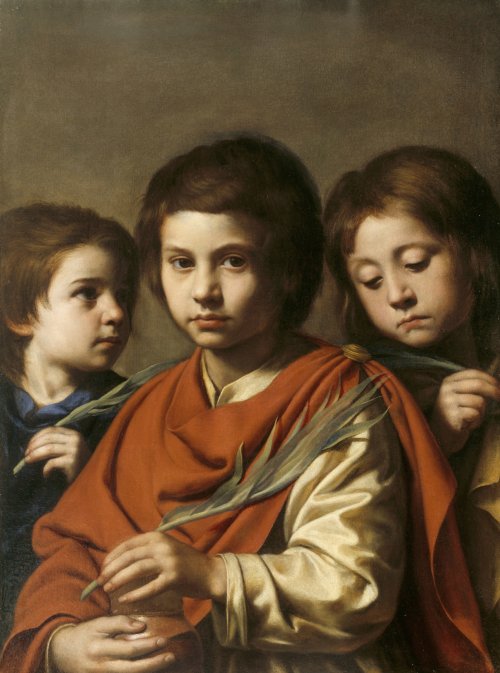 Caravaggio was a man who made enemies easily. A quick tempered, intolerant artistic genius who was fond of a drink and prone to violence, he was frequently in trouble with the authorities and eventually fled Rome after being accused of murdering a former friend in a gang fight. This uncouth upstart also outraged the artistic establishment by by-passing traditional training methods and giving young painters the idea that all they had to do was to put brush to palette and bare canvas. Yet he also had great friends and passionate followers and his revolutionary techniques inspired artists across Europe.

The extraordinary range of emotions aroused by Caravaggio will be portrayed in Caravaggio’s Friends & Foes, a major loan exhibition held by Whitfield Fine Art at 23 Dering Street, London W1 from 26 May to 23 July 2010. The exhibition which will mark the 400th anniversary of Caravaggio’s death, will include paintings by his deadly enemies Giovanni Baglione and Tommaso Salini, his loyal friends Louis Finson and Prospero Orsi, the painters Antiveduto Grammatica and Cavalier d’Arpino, whose studios he worked in when he arrived in Rome, and close followers such as Lo Spadarino, Orazio Gentileschi and Simon
Vouet. Lenders include The National Trust, European museums and leading private collectors.

The exhibition will provide fresh insight into Caravaggio himself and provide a re-assessment of the work of artists whose lives were touched by his genius. It is one of a number of events taking place across Europe commemorating his death on 18 July 1610 aged only 38.
Researchers are also investigating a mass grave in the Tuscan coastal town of Porto Ercole, where he died, to see whether they can identify his bones.

Among the highlights of the exhibition at Whitfield Fine Art will be a magnificent self portrait painted in 1606 by Giovanni Baglione, arguably Caravaggio’s most bitter enemy. Baglione was impressed by Caravaggio’s technique and this self-portrait seems to have been painted to try to show that he could match his rival’s skills. Ironically Baglione was the earliest published biographer of Caravaggio yet he was angered by the success of someone who had no experience of painting figures and had by-passed the traditional training which early 17th century artists received. Baglione famously sued Caravaggio for libel in 1603 after he had circulated satirical poems about a painting he had done for a church in Rome. Caravaggio was jailed but later released under house arrest.

Another sworn foe of Caravaggio was Tommaso Salini, whose painting Bacchus is in the exhibition. The source of their enmity is uncertain, although Salini may have been motivated by professional jealousy. It is known that when the two men met by chance in 1601 Caravaggio struck Salini with his sword from behind and would have continued had he not been restrained by friends. In the libel action two years later Salini was very much on the side of Baglione and Caravaggio referred to him as Baglione’s ‘guardian angel.’

Among Caravaggio’s friends was Louis Finson, a figure of primary importance in Caravaggesque painting whose contribution has often been overlooked. Caravaggio’s Friends & Foes will show him in a new light and present this contemporary of Caravaggio as an important painter in his own right. Two major works by Finson will be included in the exhibition. Adam and Eve, painted in 1610, has been loaned by the Museum of Art and Art History at the University of Marburg, Germany and the show will also feature Saint Sebastian, a newly rediscovered masterpiece which until recently was hidden away in a private collection in Germany described as ‘Caravaggesque school’.

The exhibition will include The Lute Player by Caravaggio’s friend Prospero Orsi, which has clear similarities to Caravaggio’s own painting with the same title, two works by his follower Lo Spadarino, one loaned by The National Trust from Attingham Park in Shropshire and the other by Perth Museum and Art Gallery in Scotland, and Mary Magdalen by Orazio Gentileschi, an older artist much influenced by Caravaggio. The latter has been lent by a private collector.