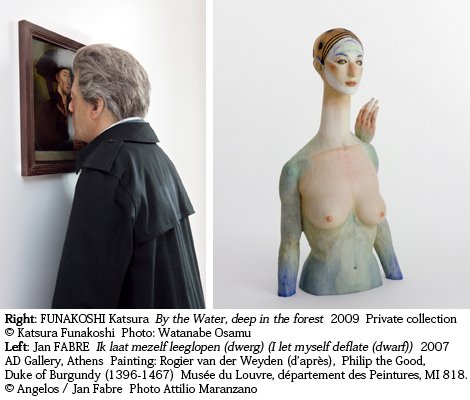 Jan Fabre and Funakoshi Katsura are artists who have become highly visible on the contemporary art scene for their superb activities in the area of sculptural representation. This large-scale duo exhibition includes historical artworks (such as 16th century Flemish religious paintings, and Kannon Bodhisattva paintings by Kano Hogai or Kawanabe Kyosai), each of which symbolizes a religious concept that the two artists share as their common background. With reference to “L’ange de la métamporphose,” a talked-about thematic exhibition held at Musée du Louvre in 2008, this exhibition is co-produced with Louvre’s curator Marie-Laure Bernadac who mapped out the above-mentioned project.

Belgium-born Jan Fabre has taken up materials such as insects, dead bodies of animals, stuffed animals, blood and salt for his works since the 1980s, to raise questions about human life and death, spirituality and religiosity. Fabre’s multidisciplinary world of expression including dramas and performances shows us contemporary interpretation and criticism of Western spirituality such as Christian culture and thought.

Funakoshi Katsura, on the other hand, has consistently carved out camphor wood to represent human figures. His whole work shows the established and unique world of expression endowed with a wonderful combination of powerful chisel cuts and delicacy. Funakoshi, who made saint images such as Madonna and Child for his early works, has created a world of woodcarving reflecting transcendence and spirituality also in his later works of human figures. Having recently added a motif of sphinx, his world of production has been further diversified, filled with religiosity entailing the tradition of Buddhist sculpture.

By verifying the two artists’ worlds of expression in contrast, we try to approach the root of spirituality of each of the East and the West from various angles. Touching on the diversity of modernism in the West, we try to review aspects of the reception of modernism in Japan that is located at the periphery in the Western-oriented worldview. Another question that we try to bring to light is how religious art that seems to have been divided and severed from society in the previous century has been handed down in the undercurrents of contemporary art in the context of advanced globalization in the world. We are also watching with interest how it will develop.