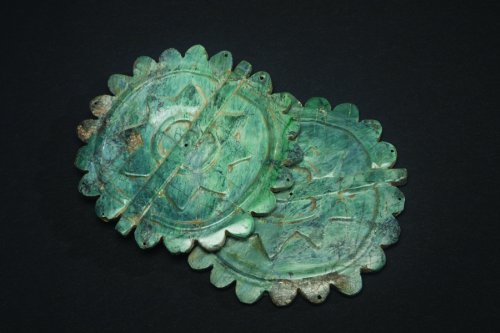 The University of Miami Lowe Art Museum’s summer exhibition will include objects from ancient Mexico through Panama that explore the complex relationship between art and the natural world. Jaguar’s Spots: Ancient Mesoamerican Art from the Lowe Art Museum, University of Miami will be on view from June 26-October 31, 2010. A preview lecture and reception will be held on Friday, June 25 from 7-10 pm. The lecture will be presented by Exhibition Curator, Dr. Traci Arden.

The Lowe Art Museum has been collecting pre-Columbian art since 1956, and this comprehensive exhibition includes a selection of 175 objects from the permanent collection, many of which have never been displayed before. The exhibition covers ancient cultures from Mexico through Panama and Costa Rica, with pieces from the Olmec, Maya, and Aztec areas spanning a period of over 2000 years. A very fine and rare codex style Maya vase with text and mythological imagery was acquired especially for this exhibition and will be a featured piece in the show and accompanying catalog.

The jaguar, panthera onca, is the third largest cat in the world and the most powerful predator of the New World tropics. Jaguars live solitary lives deep in the forest and are primarily nocturnal, becoming active just after sunset. During the time when the art in this exhibition was produced, jaguars roamed from the southwestern United States through Mexico and Central America and deep into South America. Today jaguars remain an endangered, poorly understood, and understudied large cat, but the ancient peoples who lived in Mexico and Central America prior to European contact had great respect for jaguars and were very familiar with its habits. Indigenous people from southern Mexico all the way to Panama chose to portray the jaguar in their artistic creations and Olmec and Maya art are both known for their striking images of this fierce and beautiful creature. One of the themes explored in this exhibition is the close interconnection between the ancient peoples of Central America and the natural world in which they lived—a largely tropical world of rainforests and mountains, rich in animal life and embraced by the sea. Objects for the exhibition were selected that span a period of over 2000 years, from the earliest signs of social complexity in the Olmec area to the height of cosmopolitan urbanism in the Aztec capital. Throughout this massive span of time the powerful creatures of the natural world remained a primary metaphor for artistic expression and the communication of social values.

The admiration for jaguars shown in the art of the ancient indigenous peoples of Central America was most likely not inspired by fear based on actual attacks, but rather on a mutual respect that scientists think characterizes the normal interactions of humans and jaguars throughout the region. Respect and even awe for the jaguar was also communicated through the various myths and stories of ancient Mesoamerica in which deities assume jaguar characteristics. One lesson we can learn from the diverse and beautiful art displayed in Jaguar’s Spots, is that humans have long looked to powerful animals for lessons and inspiration—a quest that requires mutual respect and accommodation in order to yield answers.

The Exhibition Curator, Dr. Traci Ardren (Ph.D, Yale University), is a University of Miami Associate Professor of Anthropology. Dr. Ardren is an anthropological archaeologist interested in New World prehistoric cultures and the myriad ways the ancient past is interpreted. Her research focuses on gender, iconography, architecture, and other forms of symbolic representation in the archaeological record. Along with her curatorial work, Dr. Ardren has directed numerous excavations throughout North and Central America. Her recent publications include Ancient Maya Women (AltaMira Press 2002), and The Social Experience of Childhood in Ancient Mesoamerica (University Press of Colorado 2006).

The catalog for Jaguar’s Spots will have eight scholarly essays, color photographs of all 175 pieces, and will be approximately 180 pages. The essays address important pieces in the show including Maya hieroglyphic texts.