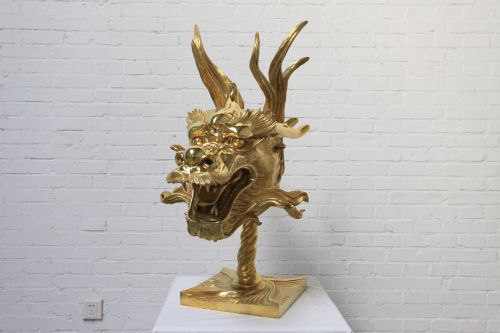 The Museum of Contemporary Art San Diego (MCASD) is honored to present the U.S. museum debut of Ai Weiwei’s topical and sumptuous Circle of Animals/Zodiac Heads: Gold (2010). The installation will be on view in the Strauss Gallery of MCASD Downtown’s Joan and Irwin Jacobs Building from February 23 through July 29, 2012.

The museum’s curatorial team first saw the gold zodiac heads in Beijing in November 2010, and MCASD is the first U.S. museum to present the series.

“We saw Ai Weiwei’s zodiac heads as he was creating them in his studio,” said Kathryn Kanjo, chief curator at MCASD. “We were attracted to their sparkling gold patina and museum scale, and we knew we knew we had to seize the opportunity to show this installation.”

The MCASD exhibition of the Circle of Animals/Zodiac Heads: Gold is the start of a traveling tour organized by New York-based AW Asia that includes domestic and international venues.

“We are pleased to debut the Circle of Animals/Zodiac Heads: Gold world tour at MCASD,” said Larry Warsh, founder of AW Asia. “It is important to remember that while Ai Weiwei is not allowed to travel outside of China at this time, it is crucial that his art continue to be seen by a global audience and that his voice is still heard by people around the world.”

The same zodiac figures featured in MCASD’s exhibition are also used in a larger scale bronze installation that has traveled to several locations since it was unveiled in Manhattan’s Pulitzer Foundation last May.

The recent works by the renowned artist and activist reference a European version of the Chinese zodiac designed by Italian Jesuit Giuseppe Castiglione. The original sculptures, with their international connections, were built for an elaborate water-clock fountain at the imperial summer home of Emperor Qianlong, just outside of Beijing. In 1860 during the Second Opium War, the imperial gardens were ransacked, displacing the twelve zodiac heads. To this date, only seven have been recovered. Continuing his work of re-interpreting cultural objects from his own fantasy and historical knowledge, Ai revisions all twelve zodiac heads. His work comments on the tension between what is “fake,” what is a “copy,” and what may constitute the better of the two.

Hugh Davies, MCASD’s David C. Copley director and CEO, remarked, “We have a close relationship with Ai Weiwei, and presenting this installation is a continuation of our commitment to this artist over time, not only for his captivating work but for the way he’s expanded the possibilities of activism within cultural production.”

MCASD owns two of Ai Weiwei’s Marble Chairs, which Davies and Kanjo also saw in the artist’s studio on the 2010 China trip. The chairs were included in the Prospect 2011 exhibition and subsequently purchased by the museum. After the artist’s arrest at the Beijing airport on April 3, 2011, MCASD mounted a 24-hour protest to raise awareness of his detention and call for his release. A broad roster of staff, museum members, trustees, and community leaders took turns occupying two traditionally styled Chinese chairs for one-hour periods. The 24-hour sit-in was covered by national and international media.

MCASD will present Circle of Animals/Zodiac Heads: Gold concurrent with the exhibition Isaac Julien: Ten Thousand Waves, a nine-screen video installation that poetically weaves together stories linking China’s ancient past and present. The exhibition is Isaac Julien’s most ambitious project to date.