Museums throughout the world have been lining up to exhibit the immense, gleaming orange ‘Easter egg’ with magenta bow ‘Baroque Egg with Bow (Orange/Magenta)’, by multimillionaire artist Jeff Koons. The private collectors, however, chose Museum Boijmans Van Beuningen because of their special link with Rotterdam. The object (over 6 m3) will be on show in the museum for three years. 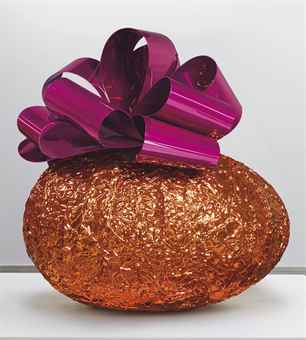 This week, ‘Baroque Egg with Bow (Orange/Magenta)’ (1994-2008) by the American artist Jeff Koons (1955) is being installed in Museum Boijmans Van Beuningen. The giant ‘Easter egg’ with magenta bow weighs two thousand kilo and is worth millions of Euros. Thanks to the lenders from Rotterdam, the work will be on view for the coming years in the museum’s entrance area. Koons made ten eggs in a period of fourteen years. Each object is part of an important private collection, such as those of François Pinault and Damien Hirst. No single egg belongs to a museum collection. As with many of his works, Koons stimulates several senses with his Eggs.

Jeff Koons
Jeff Koons is famous for his enormous objects such as gigantic rabbits and religious pigs with which he topped, until recently, the list of best paid artists ever. Koons is a master of enlarging everyday objects to enormous proportions. His “new-pop-art type” works are uncritical blow ups of the consumer society. In his creations, he brings together high and low culture in objects that are seductive, but at the same time überkitsch. His New York studio, where more than 80 people work, is reminiscent (as, too, is his work) of Andy Warhol and his Factory in the sixties.